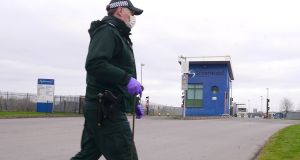 A dissident republican bomb found in a lorry in Co Armagh was intended to blow up on board a ferry “around the time the UK left the EU” on Brexit day.

Assistant Chief Constable George Clarke told reporters on Thursday that a call was made to a media outlet on January 31st to say that there was a bomb on the trailer of a lorry at Belfast port which was due to travel on the “midnight boat”.

In a further call to a media outlet on Monday, the caller stated that the intention “had been for that device to explode on Friday evening around the time that the UK left the EU”, ACC Clarke said.

The device, he said, “could have caused death and very serious injury and harm to members of the public”.

It was located late on Monday or early on Tuesday morning in Silverwood Industrial Estate in Lurgan following what ACC Clarke described as “a substantial clearance” operation.

“Our information,” he said, “is that that lorry at no time left the yard. The second call indicates an intention on the part of the bombers that it would have travelled to Belfast,” he said.

Police sources believe that the bombers attached the device to the wrong trailer. ACC Clarke said those who planted the device were “absolutely callous and reckless”.

“These bombs are made by terrorists, they are made to a standard which cannot guarantee any form whatsoever of safety and once that device had left that yard, if it had of done, it was exposing people on the public road at a busy time and in busy places to huge levels of risk,” he said.

“If the device was planted on a Friday, it was between Friday and Monday before they gave us the information that enables us to locate this (device),” said ACC Clarke. “During that period of time, a viable bomb is in a commercial yard posing a significant risk to anyone who comes within range of it.”

The public, ACC Clarke said, could expect to see “an increased uniformed presence in and around ports in Northern Ireland”, as well as additional covert security measures.

Northern Ireland’s first minister, DUP leader Arlene Foster, said the discovery of the bomb was a “chilling reminder of the threat posed by these terrorists”.

“The potential damage which could have been caused and loss of life either here in Northern Ireland, on board a ferry or in Great Britain do not bear thinking about,” she said.

“It is significant that information was available which meant police could search the ferry and ensure it was able to sail safely. The disruption of such potential attacks can save lives and we owe a huge debt of gratitude to all those working to keep the public safe and thwart the efforts of terrorists.

“It is vital that information continues to be forthcoming and the police are assisted in efforts to bring anyone responsible for such incidents to justice.”

Following the initial call to police on Friday, checks and searches were carried out in the area of Belfast docks by the PSNI working in conjunction with the ferry company, Belfast Harbour authorities and Police Scotland.

Nothing was found. There was no midnight ferry, but a Stena Line ferry departed safely for Scotland at 11.16pm.

A spokesperson for Stena Line said the company could not comment due to the ongoing police investigation.

“It gave us the detail of a commercial haulage company and it indicated that the device had been left on a vehicle or on a trailer connected to that company and the intention had been for that device to explode on Friday evening around the time that the UK left the EU.”

On Monday and Tuesday the police and the haulage company eliminated around 400 vehicles from their search. The device was found attached to a heavy goods vehicle in Silverwood Industrial Estate.

It was made safe by British Army bomb disposal experts.

The device was found attached to a trailer belonging to Lurgan-based firm Agro Merchants, which delivers fresh and frozen food throughout the UK and EU.

In a statement to The Irish Times, a spokesman for the company said they had “worked closely with the PSNI to quickly identify if one of our vehicles was concerned [in the incident] and with the assistance of the local authorities have been able to locate and remove the items from the area.

“We place the safety of our staff and members of the public as an absolute priority and we have worked with the local authorities who have acted promptly to successfully and safely conclude the situation,” he said.

Seamus Leheny from the Freight Transport Association said it was “completely irresponsible” that a device should have been placed on a lorry, endangering the lives of its driver and other road users.

Had it gone off on a ferry, he said, “we could have been looking at multiple loss of life”.

It was, he said, a “dangerous and sad day” for drivers and a worrying development for the transport industry.

“Do we have to go back to the days of checking trucks?” he said. “We don’t want to see security checks on trailers, but there is a fear there now.”

SDLP MLA Dolores Kelly said those behind the attempted bombing were “intent on causing maximum devastation and killing innocent people”.

“We cannot become complacent about the threat that dissident republicans pose and their desire to kill people in our communities in the pursuit of an outdated ideology that has been rejected by the people of Ireland.

“If anyone has information about this attempted bombing, I would encourage them to come forward to police as soon as possible. It is vital that we bring these criminal gangs to justice before they kill someone else.”

UUP MLA, Doug Beattie, said the British government should find and jail the perpetrators as a matter of national security.

“This was no minor device, this was a very deliberate attempt to cause an explosion on a ferry, and given the inherent instability of these devices, it could easily have detonated in the lorry’s yard, on the M1, in the middle of Belfast or on a ferry itself in the middle of the Irish Sea.

“Without a doubt it was an attempt to isolate Northern Ireland from the rest of Great Britain by creating a threat to on-board ferry traffic,” he said.

“Had this been on a ferry from Dover to Calais the UK Government would be mobilising every asset possible to track down the perpetrators; I call on them to do so with this, and treat it as the National Security threat which it is,” he said.