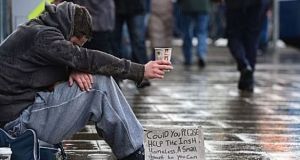 Nineteen Dublin hotels each received payments in excess of €1 million last year to provide emergency accommodation for the homeless.

One hotel received payments of €4 million-€5 million, according to new figures provided by the Dublin Regional Homeless Executive, which confirmed the spend on providing temporary and emergency accommodation for the homeless increased 19 per cent to €170 million in 2019.

In response to a Freedom of Information request, the executive confirmed that of the 19 hotels, one had also received payments of €3 million-€4 million to accommodate the homeless last year.

Another 21 hotels received payments of €500,000-€1 million. In total, 70 hotels provided emergency accommodation for the homeless through the executive last year.

The sharp increase in payments to emergency accommodation providers came against the background of further increases in homeless numbers in Dublin in 2019.

The numbers of homeless accommodated in hotels and B&Bs increased by 15.6 per cent from 2,282 in January 2019 to 2,638 at the end of December. Many of these were children.

He stated that the business of accommodating the homeless is a “big cash cow” for the hotels concerned.

The executive declined to name the hotels and B&Bs that have received payment.

Its FOI unit stated: “I am satisfied that the financial and commercial interest of the emergency accommodation providers would be negatively impacted by the release of this information.”

Overall, €170 million was spent by the executive on providing emergency accommodation for the homeless last year.

While €80.16 million was paid to hotels and B&Bs, the amount paid to non-governmental organisations for supported temporary accommodation, including family hubs, totalled €70.26 million – an increase of 16 per cent on the €60.62 million paid out under that heading in 2018.

Overall in the four-year period from 2016 to 2019, inclusive hoteliers have received payments totalling €203.5 million from the executive as the number of homeless requiring emergency accommodation rose.