Department of Transport says e-scooters not allowed on public roads, fines may be issued 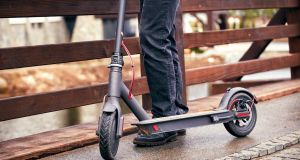 E-scooters are not permitted on public roads, and users may be subject to a fine or penalty points for doing so

Confusion over the legality of electric scooters has lead to sales falling by more than 50 per cent in one Dublin outlet prompting the owner to seek legal advice with a view to challenging in the courts the Department of Transport’s insistence that they are not allowed on public roads.

According to the Department, electric scooters cannot be used on public roads and anyone doing so could be fined, given penalty points or have their “vehicle” seized by gardaí, under the Road Traffic Act 1961 which deems them to be “mechanically propelled” and requiring tax and insurance.

The Minister for Transport Shane Ross recently asked the Road Safety Authority (RSA) to research how e-scooters and other such vehicles are regulated in other countries, particularly other EU member states to see if legislation needs to be updated.

However Garry Grace of the Fairview-based retailer skoot.ie said more needs to be done to clarify the situation and he expressed the view that as the devices he sells require a degree of physical propulsion before an electric motor kicks in, they should not be classified as mechanically propelled.

“I have sought legal advice and my understanding is that because our electric scooters cannot be started simply by pushing a button and need the user to physically scoot until they reach 5km per hour at which point the motor starts they are not against the law,” he said.

He added that he is willing to take legal action in search of clarity, not only because the threat of scooter seizures has caused sales in his shop to fall by “well over 50 per cent” in recent weeks, but because he believes the devices are significantly more environmentally friendly than cars and represent a cheap and efficient solution to urban congestion.

“Of course scooters need to be regulated and I think users should wear helmets and be kept off footpaths but they idea that the would be forced off our roads entirely is simply ridiculous,” Mr Grace said.

His comments have been echoed by the Green Party’s candidate for the upcoming European Elections Ciarán Cuffe who called for the devices to be given a more secure legal standing.

“The Government should be bending over backwards to encourage and facilitate new ways of getting around that are good for the planet,” Mr Cuffe said.

“Instead of encouraging this, the gards are confiscating electric scooters and the Minister for Transport, Tourism and Sport has kicked the issue to touch by commissioning reports from the Road Safety Authority. His Department seems reluctant to provide regulations.”

He said that if the State was “serious about moving towards lower emissions from transport we should be encouraging and regulating electronic scooters, and not banning them”.

Mr Cuffe stressed that it was important to “ensure that these vehicles are kept off footpaths, and we may need to insist on a maximum speed, and the use of helmets and insurance, but why confiscate them?”

When asked about the legality of e-scooters that require a degree of physical propulsion before a motor can start, a spokesman for the Department of Transport compared e-scooters to a certain category of e-bicycles.

The spokesman said some e-bikes “require continuous effort on the part of the cyclist [and] are considered to be pedal cycles” because “the engine is not the means of propulsion, but an aid to the user”.

Other e-bicycles “that can be exclusively propelled by the motor are classified in EU law as low-performance mopeds” and are subject to Road Traffic legislation, with the user obliged to have tax, insurance and an appropriate driving licence where the vehicle is to be used in a public place.

He said e-scooters, similar to pedal-assisted cycles, “do not require continuous effort on the part of the user, and are therefore considered to be mechanically propelled vehicles”.