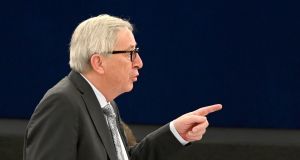 President of the European Commission Jean-Claude Juncker says UK’s membership of the EU was based on ‘business, not values’. Photograph: EPA

European Commission president Jean Claude Juncker has said the UK has never been “comfortable” in the EU and pointedly refused to say he shares the hope of European Council president Donald Tusk that Brexit will be abandoned.

In an interview with a number of Polish, Czech and Slovak newspapers, Mr Juncker said the UK’s membership of the EU was based on “business, not values.”

Asked about Mr Tusk’s “silent hope” that the UK will never leave, and if it made sense for a country to be kept in the EU if it didn’t wish to remain, Mr Juncker replied: “This is nothing new! I have been following UK affairs for a very long time.”

As minister for labour, minister for finance and prime minister, whenever I have been in talks with my British counterparts, my impression has always been that they were not comfortable in the EU. Moreover, they never felt a sense of joy at joining the EU.”

Mr Juncker’s comments - and the contrast with the views of Mr Tusk, who chairs the European Council, the group of heads of all EU governments - demonstrates the growing division between those in Brussels and elsewhere in the EU who want the British to leave as quickly and painlessly as possible, and those who hope that the UK might reverse its decision on Brexit.

Although the British supported the enlargement of the EU that admitted the countries of central and Eastern Europe in 2004, Mr Juncker said the British were now “complaining about the effects of free movement of people, despite not having taken advantage of the transition period when new countries were admitted to the EU in 2004.

For the British, integration has always been about economic gain. For them it is a system based on business, not values.

“Under such a system, you cannot be surprised that when people are asked in a referendum if they want to stay in the EU, they say ‘no’, albeit by a small majority,” Mr Juncker said.

“It also happened because there was no real referendum campaign. David Cameron and I agreed on 10-12 pages of compromises on many issues. However, this never featured in the discussions leading up to the referendum.”

Mr Juncker was then asked if former French president Charles De Gaulle “was right to keep the British out of the community”?

He replied: “I never had the opportunity to discuss this with him in depth.”

Mr Juncker was also asked about threats to the EU and whether there was a risk of it disintegrating.

“As far as I can remember, people have always said that the EU is in crisis. Is it? No, it’s the world that is in crisis. The world has become more complex. The EU is not facing a crisis that would pose a threat to its existence,” he said.

Mr Juncker has six months remaining as president of the Commission, one of the most powerful EU roles. He has said he will not stand for a second term.