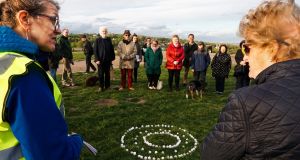 Vigil organiser Nuala Flynn (left) with other participants at a memorial event on Hampstead Heath for Peter Tyrell, who suffered years of abuse at Letterfrack industrial school. Photograph: Joanne O’Brien

For many of those gathered at London’s Hampstead Heath on Friday to remember the life and death of campaigner Peter Tyrrell, Ireland evokes memories of torture and shame.

Like Tyrrell himself, these survivors had emigrated from an island that had made them outcasts.

On April 26th, 1967, Peter Tyrrell set fire to himself on Hampstead Heath aged 51. His body was identified a year later, with torn fragments of a postcard addressed to Dr Sheehy SK, Trinity College Dublin.

Tyrrell’s harrowing memoir, Founded on Fear, recounts a lost childhood of extreme physical, emotional and sexual abuse under the whip-wielding fists of the Christian Brothers at St Joseph’s Industrial School at Letterfrack, Co Galway. It was not published until 2006 when the Commission to Inquire into Child Abuse was under way.

“We’re here today to recognise in a public place that Peter died and lived with integrity for truth, love and justice,” said Nuala Fynn (64) who organised the vigil.

“Ireland’s traumas need to be taken out of private places and brought out into the open,” said Flynn, whose mother was born in Co Mayo. “There is a danger of talking about this as the bad old days but there is still so much unfolding.”

Born into poverty in Galway in 1916, Tyrrell was one of 10 children. He was traumatised by years of violent beatings at Letterfrack and left Ireland for London at the age of 19, later  joining the British army. When he returned to London in 1945 during the IRA’s war-time bombing efforts, the city was imbued with anti-Irish sentiment.

Tyrrell returned briefly to Ireland but felt disconnected from the people who lived under the rule of the Catholic Church. Back in London, emblazoned by his memories and determined to effect change, Tyrrell spent years detailing his abuse in letters to politicians, church leaders and newspapers, but his story was largely ignored until long after his death.

The calm of the candlelit vigil at the top of Parliament Hill turned to anger later at Children’s Corner Community Centre, as speakers castigated Ireland’s brutal past and “amnesiac” present.

Conrad Bryan, a trustee of Irish in Britain, described as “almost dystopian” the experience of being raised at St Patrick’s home in Dublin.

“There is an element of corruption that we all know about. Information was hidden back then, people didn’t want to know. Now the Government is pushing through a Bill that will prevent people from accessing their birth records and family history,” he added, referring to both the Adoption (Information and Tracing) Bill 2016 and the Retention of Records Bill 2019.

Peter Mulryan (75), chairman of the Tuam Home Survivors Network, travelled from his native Galway to speak about his continuing struggle to obtain family records.

“I have a sister who is missing and I just hope she was sold off to America and is not lying in that septic tank,” he said.

Artist Bernard Canavan, who paints still life scenes depicting Irish emigrant life, also addressed the meeting. Born in 1944, Canavan spoke about the shame of growing up as an “illegitimate child” and an outsider in Co Longford. “People asked my mother: ‘Where did you get him?’ They treated me differently to everyone else,” he said.

Canavan moved to London in the 1960s. “Like so many in this room tonight, I have had to reinvent myself,” he said.

He had no “rose-tinted view” of his home country, he added. “It’s interesting that Tyrrell was born in 1916 . . . Ireland is mad about 1916; the guns, the martyrs and the heroism, but that tells nothing about the life we lived.”