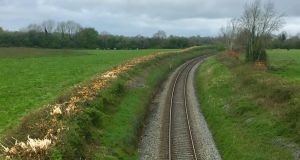 A view of a rail line in Co Offaly after the removal of hedges and trees by Irish Rail. Photograph: Pippa Hackett

Irish Rail has rejected claims it had engaged in “wanton hedgerow destruction at the height of the nesting season” by cutting back trees and hedges on a stretch of the Dublin to Galway rail line.

Green Party spokeswoman on forestry and animal welfare Pippa Hackett had posted pictures she took which she says illustrate the scale of vegetation removal along the line.

“What I have witnessed over the past week has been catastrophic for our birds and biodiversity. I have seen many incidences of severe hedge-trimming, even hedge removal, during the cutting season, but never have I witnessed such wanton hedgerow destruction at the height of the nesting season, with hedges on the point of bloom. Nests, chicks, and biodiversity have been mulched to the ground,” she said.

Irish Rail has defended removing hedges and trees on this stretch of rail on safety grounds, citing incidents on the line due to overgrown vegetation.

While it is an offence to destroy hedgerows and trees from March 1st to August 31st, Irish Rail has a derogation under section 49 of the Transport (Railway Infrastructure) Act, 2001, to “cut or lop any tree, hedge or shrub” where safety or operability is undermined.

“For the vast majority of landowners and farmers, March 1st is when they pack away their flails and saws, and leave the hedges to themselves,” Ms Hackett said. “It appears Irish Rail see fit to ignore this law by seeking exemption, and are happy to destroy hedges and trees well into April, when birds are sitting on nests and rearing their chicks.”

She said concerns were raised to Irish Rail “when they began their decimation of the mature hedge on the other side of the track. Yet, despite pleas from members of the public, they returned the following week, to completely destroy the hedge on the opposite side.”

She said no one was disputing railway safety was paramount, but she questioned the timing of the hedgerow removal. “Not only had they [Irish Rail] six months to conduct this work when the birds were not nesting, the severity with which these hedges have been butchered is deplorable.”

“Tree- and vegetation-related incidents can have a profound adverse impact on the operability and safe passage of trains,” he added.

Vegetation management was critical to maintaining safe railway lines, he said, and that while the company tried to do much of its vegetation work during winter months sometimes this was not practical or safe.

Vegetation management outside the designed season took place “only where safety or operability is undermined”, he added.

Mr Kenny said trees on that stretch of the Dublin to Galway line were causing visibility issues and had damaged fencing, which meant animals had gained access to the line.

Irish Rail was committed to maintaining and enhancing biodiversity along its rail lines, Mr Kenny said.

“We are continually reviewing and updating our vegetation management protocols as well as engaging, on an ongoing basis, with competent technical groups such as Woodlands of Ireland, the National Parks and Wildlife Service (NPWS) and various environmental specialists.”

On this specific area, they were engaging with the NPWS and planning to meet Green Party representatives to outline an approach to ensure protocols meet best environmental practice while ensuring the safety of the railway.