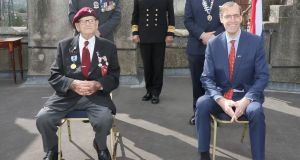 Sam Kendrick was presented with a medal by Dutch ambassador Adriaan Palm on the roof of Enniscorthy Castle on Friday. Photograph: John Walsh

The Dutch ambassador to Ireland has honoured one of the last Irish survivors of the Battle of Arnhem 76 years ago for his part in the Liberation of the Netherlands.

Adriaan Palm said he was delighted to be honouring 95-year-old Sam Kendrick from Wexford for his part in the Battle of Arnhem where he fought with the British 1st Parachute Regiment as they attempted to capture the bridge across the Rhine in the hope of bringing the second World War to an early end.

Speaking with the Irish and Dutch flags fluttering behind him at a roof top ceremony at Enniscorthy Castle in Co Wexford, Mr Palm said people should never take peace, freedom and democracy for granted.

He recalled his own father, who was just ten at the time, told him years later that Operation Market Garden was “a signal of hope, hope for liberation”.

“We remember those who lost their lives at the Battle of Arnhem, and we thank those who survived - Sam, you didn’t have to be there, you didn’t have fight at all but you did so as a youngster for our freedom, our peace, our justice and I salute for that.

“Now is the time to show our gratitude to you, Sam and, through you, to all Irish citizens who fought for our freedom in those dark days” said Mr Palm as he presented Mr Kendrick with a medal of remembrance from the Dutch government to honour his part in the Battle of Arnhem.

Mr Kendrick, who lives at Kilmore in his native Wexford, was 18 when he parachuted into Osterbeek, just west of Arnhem, on September 17th, 1944, as part of a 10,500-strong British and Polish force sent to capture the bridge over the Rhine.

Equipped with a flame thrower and a Sten gun, Mr Kendrick was hit in the foot by shrapnel when he and his comrades encountered a German force comprising five tanks, 15 half-tracks and enemy infantry on the Arnhem-to-Ede road, and they were forced to retreated to Osterbeek.

He was involved in some of the heaviest fighting of the battle before he was captured over a week later and sent as a prisoner of war to Germany where he found himself collecting bodies in Dresden after the city suffered 25,000 civilian casualties when it was bombed by the RAF and USAAF in February 1945.

“I never thought any at stage when I was Arnhem that I would be back home in Wexford being honoured by the Dutch government like this – my last words since I came home are ‘what am I doing here?’ because a lot my comrades were killed, and I was lucky, very lucky,” he said.

“That medal means everything to me – I am delighted and I feel proud for the honour the Dutch people have given me today because they were so good and so generous to us – they said we were heroes, but there are no heroes, it was a job and we all just tried to do your job.”

Among those who attended the ceremony to honour Mr Kendrick were Chief of Staff of the Defence Forces, Vice Admiral, Mark Mellett; Minister of State, James Browne; chair of Wexford County Cllr Ger Carthy; and President of the Royal British Legion, Republic of Ireland, Lt Col Ken Martin.