Pat Smullen was as a ‘fighter’ who always did his best, funeral service told

Jockey, who died from cancer aged 43, laid to rest in his local cemetery in Offaly 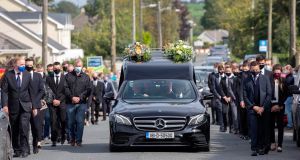 Pat Smullen’s remains are given a guard of honour through Rhode on the way to St Peter’s Church. Photograph: Colin Keegan/Collins Dublin

The wife of jockey Pat Smullen described her husband as a man who was tough and a winner, but one who was laid low by the cancer that killed him.

Frances Crowley, herself an accomplished jockey and trainer, delivered a moving eulogy to her husband who died at the age of 43 earlier this week from pancreatic cancer.

A sparse crowd, in accordance with social distancing regulations, attended the funeral service at St Peter’s Church in Rhode, Co Offaly, though hundreds of others were outside the church or watched on the internet.

Mr Smullen’s coffin was carried into the church to the strains of Amazing Grace. The coffin was draped in the silks from his 2016 Epsom Derby and Irish Derby wins, the highlight of a career which saw him win Irish champion flat jockey on nine different occasions.

Ms Crowley said of her husband of 19 years that Mr Smullen, whom she married in 2001, had been “my best friend, my soulmate”.

She was heartbroken for the couple’s three children, Paddy, Hannah and Sarah, and for Mr Smullen’s mother Mary who is going through the “unbearable pain of losing her son 15 years after losing her husband”.

She described her husband as “strong, brave, tough, fighter, winner” but also someone who was scared and vulnerable given his diagnosis for pancreatic cancer which happened in March 2018.

After his diagnosis, he retired from racing and started fundraising for pancreatic cancer research. He raised a total of €2.6 million for research into what is one of the deadliest cancers.

“He was only human and a human body can only take so much. But his spirit never gave up; in the end, it was his body that gave in,” she said.

She praised the doctors and nurses in St Vincent’s Hospital, Dublin, who had looked after him in his final days.

“As I left Pat in the hospital to go home every night, I knew he would be treated with dignity. I can’t thank them enough for the care they gave.”

As he lay dying he told her that he was doing his best. She concluded: “You always did your best, Pat. Always.”

Rhode parish priest Fr Greg Corcoran said Mr Smullen was not only an accomplished rider but someone who was a “nice person” and who treated everybody he came in contact with respect and courtesy.

“I’ve seen words written from starting stall teams, carpark attendants and tea ladies and they all reflect just how gracious and humble he was to everyone. He always helped young jockeys as well. All of their lives were richer for having known him. He had time for everyone.”

Mr Smullen’s remains were buried in the adjoining cemetery.