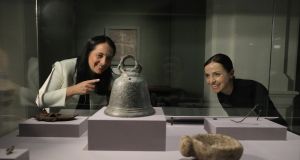 Minister for Culture Catherine Martin and Catherine Heaney, chair of the National Museum of Ireland, at the launch of the ‘Glendalough: Power, Prayer and Pilgrimage’ exhibition. Photograph: Julien Behal

Every Covid cloud has a silver lining, even if it is hard to find.

One good thing to come from this pandemic is the disappearance of the annual party think-ins from the political calendar.

Nobody likes them. Nothing happens at them. TDs and Senators are terrified they might turn up in somebody’s Twitter feed looking three-sheets-to-the-wind in a hotel bar after a long day discussing policy. So there isn’t even a whiff of scandal.

The Greens may have come up with an acceptable alternative to taking off to some far-flung part of the country to talk shop for two days.

The party is having an online “Refocus Day” on Saturday for all members.

It comes on top of a two-day “think-in” last weekend, also conducted remotely, when members mulled over the events of a momentous year and considered the new challenges of government.

There is a certainly lot of bonding going on, with another get-together in a few weeks’ time when the party holds its annual convention.

Meanwhile, the party having re-elected Eamon Ryan as leader in July, Catherine Martin’s job as deputy leader is now up for reconsideration in accordance with party rules.

Martin, who finished a very strong runner-up to Ryan in that election, is standing to retain her old job and is currently unopposed.

She has already pulled in far more than the 50 nominations required to run, and they are still coming in. The discombobulation caused by the leadership contest appears all but gone, with support for Catherine coming from elected and unelected members across the island, including a range of members who strongly supported Eamon for the leadership: Cabinet Minister Roderic O’Gorman, Minister of State Ossian Smyth and Cllr Dan Boyle among them.

Also rowing in behind Martin is MEP Grace O’Sullivan, who was undeclared during the leadership contest.

The count for deputy leader is due to take place at the convention but, as of now, there isn’t a whisper of a challenger to Martin.

Good news for the Greens, who say it’s good to talk and that their “leadership conversation” in July was a healthy rather than a divisive one.

I’ve heard of ‘embedded journalists’ but this is ridiculous

Fianna Fáil is a bit wobbly at the moment. But there is one issue uniting parliamentary party members whether they are supporters of party leader Micheál Martin or long-grass cheerleaders for a replacement.

They all agree it is folly to say anything important or confidential at parliamentary party meetings as everything that is said is leaked to the media.

Leaks are nothing, but this information flow verged on the farcical on Wednesday night when details of what was being discussed were being tweeted by journalists as the meeting was still happening.

Politicians, incommunicado behind closed doors, were reading real-time accounts of what they were supposedly saying. At one point, a TD had to clarify a tweet which he said did not accurately quote him.

Daniel McConnell, the Irish Examiner’s political editor, had a field day. Later, when challenged about some of the detail he disclosed, he said he had “five sources”.

The problem is that nobody can be sure who else is listening in when meetings are conducted remotely.

After the stormy gathering, Senator Malcolm Byrne tweeted about “a lengthy and positive” meeting and included a screen grab of colleagues on the Zoom call.

The image was photoshopped by Kildare councillor Rob Power.

And the best part of all is that a number of TDs actually thought it was real.

Opposition TDs have long complained of senior Ministers sidestepping Dáil questions by sending in Ministers of State to answer for them. They find the practice irritating and, in the case of serial offenders, disrespectful. When it happens, they grumble a bit, but carry on.

But it all became too much for Labour’s Aodhán Ó Ríordáin on Wednesday evening when Leo Varadkar left the chamber while he was speaking. Aodhán was deeply insulted.

Statements on protecting jobs and supporting businesses were running behind schedule when the TD for Dublin Bay North rose to address his remarks to the Tánaiste.

He began by highlighting public confusion in Dublin over the new health guidelines before highlighting the problems facing the travel agency sector as a result of the Covid crisis. He was moving onto the equally grave situation in the live events industry when Leo suddenly upped stumps, leaving Minister of State Robert Troy to bat for the department. Robert slipped quietly into his seat.

Labour’s spokesman on Education and Enterprise was fit to be tied.

He was completely disgusted.

“And he’s sitting there, listening to half of my contribution. And then he goes!”

Aodhán paused, almost lost for words but not quite. In his outrage, he abandoned his script.

“I mean, I find that incredibly disrespectful to what we are trying to achieve here. And honestly, I walked into the House saying, ‘time for party political point-scoring is over, let’s have some practical solutions here.’ and in the middle of my contribution the Tánaiste decides to walk out.

“Couldn’t wait literally five minutes. I mean, is there any point with me continuing with my contribution?”

The man was distraught.

Ó Ríordáin bravely struggled on, trying to put the atrocity behind him by channelling his inner Martin Luther King

Leas-Cheann Comhairle Catherine Connolly quietly intervened. “Your point is made, deputy,” she said gently, her unspoken “there, there, now” hanging in the air.

“My point is made but I want my point to be recorded and I want the Minister here,” cried Aodhán, in Himalayan high dudgeon.

The Government cannot go around accusing the Opposition of being difficult and not being constructive “when in the middle of a contribution that the Opposition are making the Tánaiste decides to leave. Halfway though it!”

Ó Ríordáin bravely struggled on after a long, tortured pause and a heavy sigh.

He must really be missing the football.

But politicians can work together. “We actually are a collective that, when it comes down to it, has the Irish nation at its heart.”

And why shouldn’t the Opposition point out Government failings? It’s the right thing to do. “Literally two minutes ago, before the Tánaiste walked out,” he brought up the public confusion over the guidelines and called for clarity.

“And then I have to say . . . about midway through my contribution that the Tánaiste decides to get up and leave in some kind of – I dunno – mock protest or something.”

“I just wonder actually if there’s any point in me engaging with the Tánaiste on this level because he seems to find it tedious when people decide to raise such issues with him.”

If only for the children.

We contacted the Tánaiste’s office about this gross insult to the Labour TD who was left a broken man by Leo Varadkar’s callous disregard.

A spokesman said the Tánaiste recognised the important contributions made by deputy Ó Ríordáin and other speakers in the debate. He had been in the chamber for an hour before the session, which started late. He had to leave to attend a briefing on the Covid situation.

Hell hath no fury like an Ó Ríordáin scorned. Some Government TDs, amused by the mini-meltdown, were quick to point out that he seemed very happy to stand in for senior ministers when he was a minister for state back in the day.

A State car to Inisbofin? You’ll be waiting a while

That young Fianna Fáil bucko Éamon Ó Cuív is causing a stir within the party with his calls for a new leader to replace Micheál Martin as Fianna Fáil slides dangerously toward political oblivion in the latest opinion polls.

Should that happen, the TD for Galway West might reasonably expect some token of appreciation from the next leader in recognition of his efforts. While Martin is determined to stay on as Tánaiste when swaps places with Leo Varadkar in a couple of years, the disaffected in his party are determined he will not get his way.

Would a new Fianna Fáil Tánaiste find a Cabinet berth for Éamon? Seems a bit far-fetched but, should it happen, the man they used to call “Young Dev” will be disappointed to discover that Mercs ’n’ Perks aren’t what they used to be.

During an exchange with Minister for Rural and Community Development Heather Humphreys on transport to Inisbofin island, Ó Cuív invited the Minister to take a trip with him to Inishbofin. “I’d be happy to go out there with you,” he said, asking her to take a note of how long it takes to get there by public transport.

Heather quickly replied: “I don’t have a State car. I use my own.”