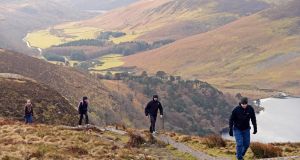 The lands, which are home to filming for the hit TV series Vikings, have been closed to walkers since the spring, with the estate saying the actions were necessary to protect its staff from Covid-19. Photograph: Eric Luke

Entry for walkers to the currently closed Luggala estate in Co Wicklow, now owned by an Italian hedge-fund billionaire, will be strictly limited, even after the Covid-19 crisis passes, it has emerged.

The 5,000-acre estate, owned for decades by the Guinness family, was sold last year for less than the €28 million asking price to the London-based Count Luca Rinaldo Contardo Padulli di Vighignolo.

The lands, which are home to filming for the hit TV series The Vikings, have been closed to walkers since the spring, with the estate saying the actions were necessary to protect its staff.

However, correspondence from the estate in May seen by The Irish Times warns that the estate will be off-limits in future when the estate has guests, when farming work demands it, or when filming is under way.

Entry for “responsible” walkers would be facilitated, it said, claiming that trees and fences have been damaged in recent months, while some people had tried to climb gates leading to the former hunting lodge.

The correspondence, dated May 2020, said access to the popular walking trails often enjoyed by hill walkers coming from Lough Dan would be restored in mid-August. So far, this has not happened.

This week, the estate said access to walkers for National Walking Day, scheduled for Sunday September 27th, will depend on whether filming on the estate is completed in time.

What do think about the closure of Luggala Estate? Do you want it to be reopened?

Since mid-summer, the access route to Lough Dan from Oldbridge has also been closed off, following complaints by a local farming family about litter, wild camping and vandalism.

The County Wicklow Partnership, which promotes access to the countryside, has posted “closed” notices at Oldbridge, but a spokeswoman said the closure would be reviewed month to month.

Hill walkers have expressed concern about the current closures, but, most importantly, about fears that the traditionally enjoyed walking routes, which were always open, would now be mostly closed.

Visitors numbers to Luggala have increased, he accepted, but the closure of Luggala has pushed walkers to already-overcrowded spots, such as Glendalough where gardaí have been needed to deal with traffic jams.

Saying that is unrealistic to use Covid-19 as a reason to to keep walkers out, Mr Garland said hundreds of people are working on the Vikings film set, often arriving by bus.

Disappointed that Luggala has been closed for so long, Wicklow Uplands Council member Jim Sheehan said the council had negotiated access to many of the trails.

In a statement, a public relations company representing Luggala said the estate’s board members are “committed conservationists with a vision to restore Luggala to a working estate”.

“Sustainability and protecting the unique biodiversity of Luggala is at the core of their vision and they have already begun remedial works including restoring famine walls, water courses and a bracken control programme,” it said.

It continued: “Access for walkers ceased earlier this year with the onset of the current public health crisis and while we carried out these remedial works. Currently, filming is taking place in Luggala and the estate is closed to the public while being used as a film location.

“Covid-19 and bad weather wreaked havoc in early August, delaying filming and our bracken control programme, resulting in a delay in our planned reopening in mid-August.

“We understand that many walkers are disappointed that they have not been able to access the estate and we remain committed to allowing access for responsible walkers once filming is complete,” it went on.