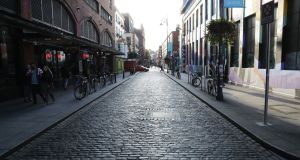 Dublin’s city centre is facing an existential crisis and a fresh shutdown which sees more business closing for good will have a devastating impact with the repercussions felt for decades, a business group has warned.

Richard Guiney, chief executive of business umbrella group Dublin Town, told The Irish Times that the city’s economy was “an ecosystem with all businesses feeding from each other”.

He said that if businesses kept closing then the city would become increasingly less attractive and footfall would decline further.

He said the general rule of thumb in urban centres was that when 25 per cent of businesses closed, then the centres were at real risk of going into terminal decline.

He said the hospitality sector has been under “enormous strain financially” and added that curtailments in how restaurants and pubs which serve food are allowed to trade in the weeks ahead will heap more pressure on many businesses and could see a raft of fresh closures in the weeks before Christmas.

“Over recent years we have seen more people coming in to Dublin city centre to dine rather than to shop and since March the hospitality sector in the city has seen a massive drop in turnover under which has put it under huge pressure.

“Many of them have been hoping to simply keep the doors open and keep trading until Christmas after which there may be light at the end of the tunnel,” he said.

He listed some of the larger retailers which have already closed including Debenehams, Oasis, Warehouse and Monsoon and said he had been “speaking to property owners and there isn’t along queue of people willing to take up those spaces”.

He pointed towards of O’Connell Street, which he said was “the preeminent street in Dublin in the 1950s and 1960s before being allowed to decline in the 1970s”. Then footfall declined and its reputation declined and the impact of what had happened in the seventies was still being felt today .

He also said he had yet to see a clear rational for targeting restaurants.

“We would like to see the evidence that the virus is transmitted in restaurants we have not had that feedback from our members both retail and hospitality.”