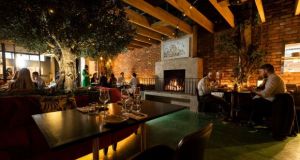 The State’s public health emergency team considered measures that would allow indoor dining to continue in Dublin, but decided instead to recommend restricting restaurants to outdoor and takeaway services only.

In a 17th September letter to Minister for Health Stephen Donnelly, Dr Ronan Glynn, the State’s acting chief medical officer, said NPHET moved instead to recommend a ban on indoor dining “given the severity of the epidemiological situation in Dublin.”

The spread of the coronavirus in Dublin is currently at an “extremely critical juncture” public health officials warned the Government, while setting out the rationale for placing additional restrictions on the capital.

NPHET expressed concern over the “growing risk” that rising Covid-19 cases in Dublin would fuel large increases elsewhere in the country, “given its population size and connectivity to other parts of the country.”

On Friday the Government placed Dublin onto Level 3 of its Living with Covid-19 plan, with strict limits on gatherings, social activities, and a ban on movement in and out of the county.

Dr Glynn said NPHET’s view was “the profile of the disease in Dublin is at an extremely critical juncture,” and the window of opportunity to suppress the virus “without significant additional measures is no longer available.”

“Once again, the NPHET fully appreciates that this most recent advice will be disappointing, concerning and challenging for the people of Dublin in particular,” he wrote.

Public health officials were “extremely cognisant” of the effects of banning visitors to nursing homes and other residential care facilities, he said. It was critical that there were “clear communications” that visits could still take place in compassionate circumstances, he said.

Previously when community transmission became widespread in April and May outbreaks of Covid-19 had devastating impacts in nursing homes, accounting for over half of all deaths.

“NPHET concluded that the situation has further deteriorated in Dublin and there is now a very real risk of widespread transmission both across the county but also to other areas of the country,” Dr Glynn said.

The letter to Mr Donnelly, sent following a NPHET meeting, noted there were 73 confirmed Covid-19 cases in hospital, with nine admissions in the past 24 hours.

The number of hospitalisations and cases in intensive care were “all continuing to increase at an accelerating rate,” Dr Glynn said.

“Even small increases in the number of admissions have the potential to put strain on the hospital system and, were the current pattern of admissions to continue, this would impact on healthcare delivery more broadly,” he said.

The senior Department of Health official said if the trajectory of the virus continued along its current path there would be up to 1,000 cases per day in four weeks’ time, 60 per cent of which would be in Dublin.

The new restrictions included a ban on travel in and out of Dublin, apart from work, education and other essential purposes.

The additional measures for Dublin would only have a substantial effect on the spread of the disease “if there is wholehearted widespread collective buy-in,” he warned.

NPHET did not recommend a return to “cocooning” for people aged 70 and over and the medically vulnerable, like in the previous national lockdown.

Instead Dr Glynn said the elderly and medically vulnerable should stay at home “as much as possible” and limit their social engagements to a “very small networks for short periods of time.”