‘It will be hard for people . . . they’ll miss it’: Dublin’s religious once again close their doors 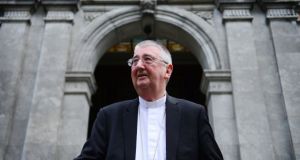 Dublin’s religious are closing their doors this weekend, reluctantly but accepting “it has to be done”.

In messages to their clergy on Friday the Catholic Archbishop of Dublin Diarmuid Martin and the Church of Ireland Archbishop Michael Jackson warned their churches would almost certainly have to close.

The Government decided that from midnight tonight, Dublin city and county would move to Level Three alert for the next three weeks.

Archbishop Jackson said the prospect was “both frustrating and frightening” but added: “It is important that we face this with resilience and hope”. Archbishop Martin said churches would remain closed “except for private prayer, weddings and funerals”. Attendances at these would be limited to 25 with religious services going online only.

“We have to listen to what the scientists are telling us but it is understandable that people will be upset. It is not easy to say but some people have just not been behaving responsibly. And yes people missed attending Mass a lot during the lockdown.

“Most of our congregation would be older and very responsible. We are a sedate lot, but I do think people will be pleased to see the Government sending a strong message.

“The whole webcam experience, with Mass broadcast online, is now a reality but it’s just not the same spiritual experience.” Smaller numbers at baptism ceremonies and holy communions, however, had been welcomed by many parishioners, he said. “People have found them more prayerful”.

Canon David Gillespie, vicar of St Ann’s Church in Dawson Street, said it was “unfortunate” people would not be able to attend Sunday prayer services.

“I do feel for people for whom getting to church every week is important, especially at a time of such heightened anxiety, but the wellbeing of people is more important than getting to a church.

“We are fortunate that at the beginning of this we installed the equipment to broadcast services online. I was not quite dragged kicking and screaming to the online services but I was not enthusiastic. I would always prefer to see people in the pews in front of me than a camera, but it has been well worth doing. It has allowed us to keep the community together and even build it.

“Where we would have had 100 people at church on a good Sunday, we have had 200 people watching in on devices, from all over the world. We will without a doubt keep up the online broadcast even after the pandemic.”

Fazel Ryklief, senior administrator at the Islamic Foundation of Ireland mosque on the South Circular Road said the community would close the mosque “very reluctantly”.

“When we closed before it was more like a mortuary than a mosque. The Imam was doing Friday prayers live on Facebook when no-one was allowed in the mosque. Then we had 50 people inside for prayers and about 60 people prayed outside.

“We have to observe the rules, but it will be hard for people. In Islam going to mosque raises the spirits. They will miss it.”

Dublin’s small Jewish community is hoping there will be some scope this weekend to mark Rosh Hashanah, their new year.

Maurice Cohen, chair of the Jewish Representative Council, said the Orthodox synagogue had been “operating at a very low level” since the start of the pandemic, while Hilary Abrahamson, past president of the Dublin Jewish Progressive Congregation said their synagogue in Rathgar had not reopened since March.

“It is a small and with social distancing we would only fit 20 people. How would we choose who? So we have stayed shut. It is very sad, but we have got on with it.” The community had been staying in close contact by phone and Zoom.

Mr Cohen said those who attended synagogue would miss it. “But we will abide by whatever rules we have to.”