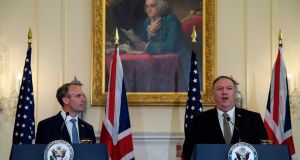 US secretary of state Mike Pompeo with British foreign secretary Dominic Raab at the State Department in Washington, on Wednesday. Photograph: Nicholas Kamm/Pool via AP

US Democrats came out in force this week to express support for the Irish-EU position challenging the British government’s attempts to undermine the Northern Irish deal on Brexit.

Deft political backroom manoeuvres around the visit of British foreign secretary Dominic Raab to Washington led to co-ordinated signals stating clearly that high-ranking Democrats were not for turning on support for Dublin in the face of a UK diplomatic charm offensive to the US.

Raab visited the US capital days after the Democratic Speaker of the House of Representatives, Nancy Pelosi, repeated that there would be no US-UK trade deal if the Belfast Agreement was compromised, warning London: “Don’t mess with the Good Friday accords.”

Democratic Congressman Richie Neal, a long-time supporter of Ireland and Irish causes on Capitol Hill and chairman of the all-powerful, trade deal-approving House Ways and Means Committee, said after he and Pelosi met Raab that he was “not persuaded” by the UK secretary’s assurances there would never be a hard border dividing the Republic and Northern Ireland.

The meeting came with a strong, tweeted declaration of support from Democratic presidential candidate Joe Biden, who warned that the 1998 peace agreement could not become “a casualty of Brexit”. The White House contender tweeted a copy of a letter sent to Boris Johnson by Mr Neal and three other prominent US members of Congress with a similar message.

“I am very happy that we have been speaking from Washington with one strong united voice,” Democratic Congressman Brendan Boyle, one of the first politicians in Washington to highlight the dangers to Ireland from Brexit, said.

The Pennsylvania representative said the concerted support for the peace agreement from top Democrats this week has been consistent for several years now.

“I don’t understand how that could possibly come as a surprise to anyone, especially in London, because we have been pretty loud and clear, both publicly and in private, for a long time now,” said Boyle, who described Biden’s tweet as “pitch perfect”.

Ireland’s Ambassador to Washington Dan Mulhall has kept up active contacts and briefings on Irish concerns around Brexit across the US political divide.

Irish insiders continue to see the benefits from the virtual State visit shown to Pelosi in Ireland last year with her high-profile backing of Ireland’s Brexit concerns, amplified this week by the extensive coverage of Raab’s trip – along with the support for Ireland in Washington – in the British media.

“All London has achieved is that more British people know about the position that Nancy Pelosi has consistently held,” said one source in Dublin.