Residents in Rathgar and Jobstown will both be affected by Bus Connects from losing direct connections to part of their properties. 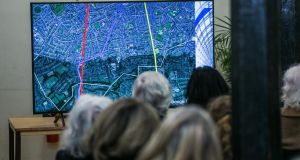 Locals at a community meeting in Christ Church, Rathgar, in relation to the Bus Connects proposals. Photograph: James Forde

Six bus routes – the 15, 15a, 15b, 14, 65 and the 65b – pass by Christ Church, the Presbyterian church in the heart of Rathgar village in Dublin 6, bringing commuters in and out of Dublin city centre.

On Tuesday, 80 or so people attended a public meeting there, organised by local election candidate Deirdre Conroy to complain about the impact the BusConnects reforms will have on the village, and to push for a metro, instead.

“They’ve already destroyed Georgian Dublin – do they want to do the same with Victorian Dublin? That’s the question we have to ask ourselves,” said Michael Daly from Rathgar in south Dublin.

Daly and his wife have been living on Terenure Road East for the last 30 years. Their home, as well as their legal firm Cogan-Daly & Company, is among the more than 1,400 properties in Dublin that stand to lose part of their front garden to accommodate bus and cycle lanes under the BusConnects plan.

The 65b begins in Citywest, travelling through Jobstown, Killinarden, Knocklyon and Templeogue before going through Terenure Road East, Rathgar Road, Rathmines Road, and on to Aungier Street, before finishing at Poolbeg Street. The church is just metres from the pharmacy owned by Fine Gael TD Kate O’Connell, who wrote to constituents in recent months stating that the current BusConnects plan is “not the upgrade the residents of Dublin city need”.

The Dublin Bay South TD said the National Transport Authority (NTA) had looked at potential changes to Dublin’s bus network “from a cold, technical perspective and have forgotten the human element”.

Daly dismisses claims that he and other affected Rathgar residents are motivated purely by nimbyism. “Really you can call it what you like. I see it as much as protecting the heritage for the future as a personal interest,” he said.

“I have a personal interest but we’ve loads of people inside [at the meeting] who don’t have CPOs [compulsory purchase orders] on their properties and they’re equally concerned about it. We are in a heritage area, we have to respect that.”

He claims any disruption to his front garden would affect “clients as well as the family – some of our clients are quite elderly, car parking is off street and is very convenient for them”.

“It is definitely going to hit our business and home.”

BusConnects aims to overhaul the current bus system in the Dublin region by creating 230km of dedicated bus lanes and 200km of cycle tracks along 16 of the busiest corridors, along with a redesign of the network.

The NTA has said the project will deliver journey time savings of up to 40-50 per cent on each corridor.

Conroy, a Fianna Fáil candidate in Kimmage-Rathmines, and one of her rivals, Fine Gael councillor Anne Feeney, both said BusConnects was a “huge issue” for the residents of Dublin 6.

“It’s all they’re focused on at the moment, especially around Rathgar and Terenure, people are very angry,” said Ms Conroy, a planning specialist and practising barrister.

This is evident travelling along the 65b bus route, where “communities not corridors” signs are on lampposts, on gates and in shop windows.

They become noticeable as you leave the city travelling on to Rathgar Road, Terenure Road East and Templeogue Road.

However, once you get past Templeogue village and towards Knocklyon, the signage and public meeting posters about bus services largely disappear. While there are no proposed bus corridors for Knocklyon Avenue, Ballycullen Road, Killinarden, Jobstown or Citywest, the network redesign will affect all bus users.

“For me personally, I struggle with public transport,” said Mary Doyle, from Jobstown. “As in, when a bus is very crowded I have to get off it, so I tend to travel at off-peak times if and where possible.

“So for me personally it is a big deal getting on a bus, so with this new BusConnects it’ll mean I might have to get on two buses, so my stress levels will be even higher.”

Others in the west Dublin suburb and neighbouring area of Killinarden admit they have heard little about BusConnects. Jobstown resident Jim Lovett, a regular bus user, favours it.

“Everyone should be happy with improvement . . . If it improved the service and gave us a faster time period, why wouldn’t you? You would want to be foolish not to,” he said.

Local solidarity councillor Brian Leech said there was “a lot of anger” at public meetings organised by his party alongside People Before Profit late last year in relation to the redesign. However, it is less of an issue in the run-up to the local elections in May.

“A few people have mentioned it to me,” he said. “What’s really come on the doors is housing though, or case work. People saying they want a transfer or their daughter is homeless, that kind of thing, rather than BusConnects.

“The environment itself is a big issue though, people talking about dumping and trees being cut down.”

Cllr Leech thinks it is significant that Fine Gael is not represented at a local level either in Tallaght South or Tallaght Central.

While BusConnects is part of the Government’s Project 2040, it has received criticism from a number of Fine Gael TDs including Catherine Byrne, Colm Brophy and Noel Rock, as well as local councillors and candidates.

Dr Eoin O’Malley, an associate professor in political science at DCU, said political leaders at local level tended to “pander” to opposition to the BusConnects plan rather than question it.

“They sort of follow what they think is public opinion. So when they hear a couple of people complaining about losing a bit of their garden or some issue like that, they tend to follow that rather than take a lead,” he said.

“One of the things that’s quite surprising is how much the left has gone down the road of trying to reject what is essentially an effort to improve public transport and you think they would be in favour of that.”

Some Fine Gael TDs warned last September that BusConnects had the potential to become the next water charges debacle.

“I doubt it would, because it’s the sort of thing that affects too few people,” Dr O’Malley said. “The small number of people whose gardens are going to be lost, they’ll probably be well compensated, and while they might seek to raise objections, it’s not an issue that other people will care about. Because if my neighbour loses part of her garden because of BusConnects, that’s fine with me because I’ll benefit from an improved public transport system.

“I’d be very surprised, because it just doesn’t affect enough people for it to become a water charges-type issue.”

Aside from local activists and politicians, the Dublin Cycling Campaign has begun to hold its own public meetings in relation to BusConnects.

The NTA has also been holding information sessions and has established community forums on each of the corridors, as well as offering one-to-one meetings with affected property owners.

Kevin Baker, of the Dublin Cycling Campaign, said: “The project is huge, and trying to get your head around it can be quite difficult. We have been explaining to members in plain English how it will affect them, how it might make their commute easier or harder.” He added that the group “broadly support” BusConnects.

“There are lots of things to fix, there’s still a lot of outstanding issues, but we’re early on in this project.

“It’s a huge opportunity for cyclists, there’s 200 kilometres of cycle track in there. It could transform the city for cycling if we get it done right.”

Kevin Carter, acting chair of the coalition, said the group began as a “reaction to misinformation” being circulated in relation to the BusConnects project.

“We hope to do some kind of pledge for when the next round of public consultation for the network comes out asking [political] candidates to pledge to be sure that they understand the plans before telling their constituents and to have some kind of caveat to say they’re not obviously transport planners,” he said. “They’re not experts in this.”

The NTA has previously said property owners who lose a portion of their garden to make way for the corridors will, on average, receive a compensation payment of €25,000.

“Some people will get more, some people may get less,” said Hugh Creegan, NTA deputy chief executive.

Commenting on the proposed compensation, Sharon Crosadell from Jobstown joked: “Do they want some of my garden?”

However, as far as Michael Daly from Terenure Road East is concerned: “Some things you can’t compensate for.”

The meeting in Christ Church on Tuesday is possibly the seventh or eighth local meeting he has attended in relation to BusConnects, he said. “I’ve been organising and involved since the start, so I intend seeing it until the end,” he added.

“We’ve had both Fine Gael and Fianna Fáil politicians coming out quite strongly, they see it as a destruction of the area. Even though their party might have different views, certainly all the local politicians here are all fully in support [of residents].”

While it’s not clear where this journey will end, next month’s local elections might help indicate the destination.