‘This is a historic place, but our work is about the future’ 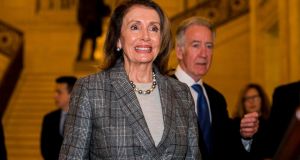 Nancy Pelosi (left), speaker of the United States of House of Representatives with Richard Neal (right) Chair to the House Ways and Means Committee, before a press conference in the Great Hall at Parliament Building in Northern Ireland. Photograph: Liam McBurney/PA Wire

A senior US politician has expressed sadness at the murder of a journalist in Northern Ireland but urged the region to look forward.

Speaker of the House of Representatives Nancy Pelosi made the comments during a visit to Stormont to mark the anniversary of the signing of the Good Friday peace agreement.

A moment of silence was held at the Long Gallery following the murder of Lyra McKee in Derry by dissident republicans on Thursday.

Speaker of the Northern Ireland Assembly Robin Newton spoke of his hope that those responsible would be brought to justice.

Ms Pelosi and her delegation of US congressmen and women are on the fourth of their four-day visit to the island of Ireland.

On Thursday they visited Derry where hours later Ms McKee was shot.

“Sadly Mr Speaker, we join you on the sadness of the tragedy that happened last night. We extend our condolences to the family, and your moment of silence at this time, on Good Friday, is especially poignant,” she said.

“You not only had a moment of silence, you presented a sense of resolve that justice would be done and the memory of that young woman would be a lesson for all of us.”

‘Our work is about the future’

She went on to urge that Northern Ireland continues on its path away from violence and provides a better future for its young people.

“What we see now stands in stark contrast to what we had seen when we came here years ago, and we would hope that that contrast would continue,” she said.

Earlier, Ms Pelosi appeared moved by speeches by two school girls from different sides of the community in Northern Ireland.

She said their message of hope will be taken across the US by the congressmen and women in her delegation.

“All of our members are here for a purpose, and you are fulfilling that purpose because you are telling us that the Good Friday accords are alive and well,” she told the young people.

“This place has been witness to so much of Northern Ireland’s proud history, but many of us have been here on occasions when it was a little more rough and tumble, shall we say, before the accords. It’s lovely to be here now.”

Earlier in the week, the delegation visited Dublin, where Ms Pelosi addressed the Oireachtas. – PA