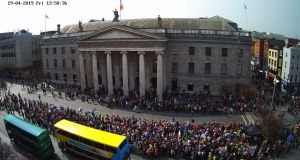 As Dublin basked in warm Easter sunshine, Sue Breen climbed onto a makeshift stage in the shadow of the GPO, a stone’s throw from where Pádraig Pearse read the Proclamation of Independence, and announced that a new Irish rebellion was under way.

“We are here because the Government and the corporations are handing a death sentence to our children and we will not stay silent,” Breen, a leading member of the Irish branch of the global Extinction Rebellion movement, told a crowd of about 1,000 people who had gathered to highlight the devastating consequences of climate change.

Breen said it was a lie that “infinite growth on a finite planet was possible” and she declared herself “in rebellion against our Government.”

She said it was “our sacred duty to rebel” and called for “every principled and peaceful citizen to rise with us”.

Breen was one of many voices, both on the stage and on the street, who were warning of the catastrophic impact climate change is having and demanding that the Government do more to help tackle the issue.

Aisling Wheeler, a farmer from Co Clare, was marshalling the peaceful demonstration as it made its way slowly from the Spire to O’Connell Bridge ahead of a sit-down protest by hundreds of people.

She said the movement had three key demands. It wants climate change to be declared a national emergency and wants the State to meet or surpass commitments it made under the Paris Climate Change Accord.

It also wants the Government to adopt the climate change recommendations made by the Citizens Assembly last year. Among those recommendations are higher carbon taxes, a dramatic reduction in plastic packaging, support for the agriculture sector as it moves to lower green house gases production and a rule mandating new buildings should have a zero or low carbon footprint.

Wheeler was not optimistic the demands would be met. “A lot people here are grieving and mourning what is being done to our planet, it’s just really sad,” she said.

Patrick Jordan from Tipperary was covered in black and silver paint - to symbolise a skeleton and the extinction of our species - and sitting on top of a ladder. He was ready to be arrested. “We know this protest is an inconvenience and we apologise but it’s not nearly as inconvenient as climate change. If we don’t change the system of capitalism then we are dead,” he inisted.

Like Wheeler, he was pessimistic. “The Government isn’t listening. If it was, then it would act as if our lives and our children’s lives depended on this,” he said. “Climate breakdown isn’t going away and neither are we.”

Former Michelin-starred chef Kevin Thornton was also on the bridge protesting. “Ireland is at a crossroads and if we take the wrong turn now, we are gone and we can never come back,” he said.

As he spoke, Green Party councillor Ciaran Cuffe was sitting on the bridge.

“Direct action is so important and can bring about real change,” Cuffe said, citing the civil rights and apartheid movements. “We are not doing nearly enough on climate change but I am heartened by the scale of this movement.”

Jo Venables, from Scotland, said that despite the good-natured atmosphere, they were causing the disruption “because it is our duty and not because it is fun. And unfortunately climate change is causing a whole lot more disruption.”

Vincent Lavery was the odd man out as he stood nearby with a sign reading: “Make friends and influence people. Do NOT sit down on O’Connell Bridge.”

When asked why he was there, he said he had fought for civil rights in Ireland and the US for 50 years and believed change came about “not by upsetting people and their routines but by appealing to their better angels.

“Once O’Connell Street is closed, they will have done a lot of damage to their cause.”

Breen, who was leading the sitdown protest saw his sign and smiled wryly. “What does he suggest then?” she wondered. “We are trying to make a difference with a non-violent protest and we will keep trying to do that because we have to keep trying, we can’t give up, it’s too important.”