Good Friday ritual remembers slain journalist along with 3,700 other victims 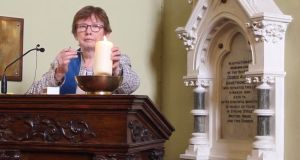 Rev Bridget Spain lights a candle in honour of Lyra McKee at the Unitarian Church’s Good Friday service for the victims of the Troubles. Photograph: Ronan McGreevy

For the last 19 years the Unitarian Church in St Stephen’s Green has had a Good Friday ceremony to name all those who died in the Troubles in Northern Ireland.

Over the space of three hours the names are called out alphabetically from Anthony Abbott, a soldier from Manchester who was shot dead by the IRA in Ardoyne in North Belfast in 1976 to William and Letitia Younger, an elderly Protestant man and his daughter, who were beaten, stabbed and shot by intruders in their home in Ligoniel in North Belfast in 1980.

The names are based on those included in Lost Lives, the monumental book published in 1999 and updated in 2008 with the names of 3,637 people who died in the Troubles in Northern Ireland.

In 2016 the name of Adrian Ismay was added to the list. He was a police officer who was fatally wounded in a bomb attack in March 2016.

In February, the Unitarian Church congregation debated how long more the Good Friday ritual should go on for. They decided they would halt the readings if there had been no fatality for five years or after 25 years of consecutive readings, whichever came first.

On Good Friday morning they added a new name to the dog-eared piece of paper listing all those killed in political violence in the North in recent years.

Lyra McKee is the 42nd victim since the turn of the Millennium to die in connection with political violence in Northern Ireland and the seventh this decade.

The Minister of the Dublin Unitarian Church, Rev Bridget Spain, said they had listened to the former SDLP politician Seamus Mallon speak last year of the climate of fear surrounding the Troubles.

“We listened and we made a silent prayer of thanks that those days were in the past,” she said.

“Since then the media has reported the find of an arms dump, that the men of violence are building up a war chest to purchase arms. There have been 15 raids on ATMs. Last night in Derry there were petrol bombs. Shots were fired.

“Today as the Earth is teeming with new life, the family of Lyra McKee will arrange her funeral. Today I added her name to the list of Lost Lives. We sent a plea to our politicians to please talk.”

With that she lit a candle in memory and said the words “Good Friday 2019 Lyra McKee, aged 29, journalist”.

The darkness inside the church was in contrast to the light outside on a beautiful spring morning in Dublin.

The same volunteers have been reading the names since it began. Paula Rainey, who now lives in Wicklow, comes every year to remember her father Joseph Campbell who was a Catholic RUC sergeant shot dead in Cushendall, Co Antrim on February 25th, 1977.

His family believe Sgt Campbell was the victim of the notorious Loyalist killer Robin ‘the Jackal’ Jackson.

Ms Rainey said: “I come every year to remember my Dad and all those who died. When I heard about Lyra, all it tells us is that killing achieves nothing. It creates victims.”

Her voice broke as she listed the 23 Campbells including her father who were killed during the Troubles.