Danger of infection by cryptosporidium and other bacteria for 600,000 people 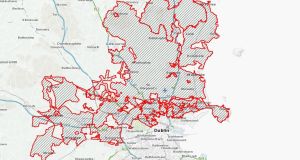 A boil water notice is in place for some 600,000 people in the greater Dublin area.

Irish Water and the HSE are to leave a boil notice in place for some 600,000 people in the greater Dublin area for at least another day.

The decision was taken by the authorities at a meeting in Dublin on Wednesday and follows Tuesday’s statement by Irish Water that a mechanical breakdown had occurred in the disinfectant processes at the Leixlip water treatment plant. Irish Water said the Environmental Protection Agency will audit the plant on Thursday afternoon. ,

The plant supplies water to homes, schools and businesses across most of north Dublin city and the Fingal administrative area of north County Dublin, parts of southwest Dublin and parts of Cos Meath and Kildare.

“This morning, during a meeting with the HSE we reviewed the test results and the impact of the Boil Water Notice. At the forefront of all discussions was the need to protect human health and that is why the Boil Water Notice will stay in place for now,” Irish Water customer strategy manager Yvonne Harris said on Wednesday.

The areas affected include homes and businesses throught large swathes of the administrateive areas of South Dublin County Council, Celbridge, Straffan and Maynooth in Co Kildare, most of Fingal County Council, Dublin’s north city as well as parts of Co Kildare.

Irish Water said the initial problem that compromised the disinfectant process of water at the Leixlip Treatment plant on Tuesday has been repaired.

However, the utility said untreated water probably remained in some 20 per cent of the network.

The HSE said there was a danger that untreated water in the network may contain cysts of cryptosporidium and giardia. These may cause gastrointestinal infections with symptoms such as diarrhoea and stomach cramps. It advised people who develop such symptoms to consult their general practitioners for testing and treatment.

Irish Water warned there may be “residual” untreated water in the network for several days, as treated water flushes the system.

A spokeswoman said the boil notice is likely to be in place for a number of days and that Irish Water will be continually testing the the supply and liaising with the HSE.

Once the HSE is satisfied with the water quality, the notice will be lifted.

Cryptosporidiosis is a diarrhoeal disease caused by a microscopic parasite (Cryptosporidium). Once an animal or person is infected, the parasite lives in the intestine and passes in the stool.

Giardiasis is a form of gastroenteritis, characterised by diarrhoeal illness that is caused by a microscopic parasite, Giardia lamblia. Giardiasis is a notifiable disease in Ireland.

Irish Water has meanwhile opened a second investigation into the “disastrous” crashing of its website at a time when it should have been warning more than half a million people that their drinking water was polluted.

The utility has blamed an “underlying problem” for the site - which it directs customers to if supplies are contaminated - being unavailable for several hours on Tuesday evening.

Ms Harris said the website only “recovered” at 11pm. It crashed after a warning was issued shortly after 5pm that around 600,000 people in the greater Dublin area were at risk from their own drinking water.

“There was an underlying problem [with the website], for which we have a second investigation ongoing,” said Ms Harris.

“The timing was really disastrous from an Irish Water perspective,” she said. “Typically when we send out alerts we would direct people to our website. The fact that the website wasn’t available yesterday evening was inconvenient again.”

Problems were detected at around 11am on Tuesday. After hours of testing by the EPA and the Health Service Executive, a decision was eventually taken at 4.40pm to issue a boil-water notice to hundreds of thousands of homes.

Ms Harris said a “small mechanical failure” at “one of the older elements” of its Leixlip plant caused the pollution.

“There may be bugs in the water that would cause a health issue for customers,” she told RTÉ’s Morning Ireland.

Ms Harris acknowledged confusion among customers about the exact areas impacted, and she urged people to “err on the side of caution”.

“If it appears from our website and the maps that you might have seen on social media that you are affected, please boil your water. We would ask customers to err on the side of caution.”

Irish Water said water must be boiled for drinking; drinks made with water; preparation of salads and similar foods, which are not cooked prior to eating; brushing teeth and making ice cubes.

It said caution should be taken when bathing children to ensure they do not swallow the bathing water.

It has advised caution if using bottled water for preparing baby food as some natural mineral water may have high sodium content. The legal limit for sodium in drinking water is 200mg per litre.

Irish Water said it was contacting all registered vulnerable customers who are affected by this boil-water notice to advise them.

It has asked anyone with queries to contact Irish Water on its helpline (1850 278 278) or to check its website (water.ie) for updates.

Green Party MEP Ciarán Cuffe called on Irish Water to show what steps it is taking to ensure that such incidents “can not happen again”.

He said it was accepted the water supply network was suffering from decades of under-investment but said the utility needed to reassure consumers their taxes were being used wisely in refurbishing the network and that the utility had a plan to prevent further release of untreated water.