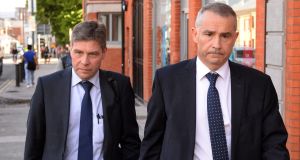 A fellow Quinn Industrial Holdings director of tortured Fermanagh businessman Kevin Lunney said he was “shocked” that former billionaire Sean Quinn would make critical comments about them while condemning the attack.

Liam McCaffrey, chief executive of Quinn Industrial Holdings (QIH), condemned remarks made by Mr Quinn in an interview last week about the role played by Mr McCaffrey, Mr Lunney and fellow director Dara O’Reilly – all former executives of Mr Quinn’s – in his removal as a senior adviser to the company in 2016.

Mr Quinn told Channel 4 News he had “no hand, act or part” in the kidnapping and sustained assault upon Mr Lunney last month, but expressed his disbelief that his “own men who he had looked after for 20 or 25 years” would be involved in his removal as an adviser. He named all three men in the news interview.

“The interview was around his denial of any hand, act or part in this, but to take that opportunity to make further critical comment under the circumstances where Kevin had been beaten to within an inch of his life – and Kevin and the remaining directors threatened with death – I thought it was an extraordinary statement,” Mr McCaffrey told The Irish Times.

Mr Quinn has condemned the attacks on his former executives, and the long campaign of intimidation and vandalism against his former business.

He described the assault on Mr Lunney on September 17th as “despicable and totally barbaric”, and said it was a reason why he was no longer interested in seeking ownership of his former businesses again.

Mr McCaffrey worked for Mr Quinn before the 73-year-old lost control of his conglomerate under the weight of about € 4 billion in debts, arising mostly from an ill-fated multi-billion investment on Anglo Irish Bank shares.

He rejected his former boss’s criticisms and said Mr Quinn should take responsibility for his own actions.

Mr Quinn was removed as an adviser from QIH by the three US investment fund owners of the business because, the funds said, he had grown uncomfortable with his role as an adviser and wanted to take ownership of the company.

“Rather than blame everyone else for his ills, he would be well placed to look in the mirror,” said Mr McCaffrey.

The chief executive of the building materials business, which employs 840 staff in the Cavan-Fermanagh area, said the executives feared further violence given that Mr Lunney’s injuries were “delivered with a threat against us all should we not resign – and that was a death threat”.

“There was no indication that that was an end to it. That was a method of delivering a warning,” he said of the attack on Mr Lunney.

He said the only way the violence would end was if the “paymaster” behind the attacks was arrested and charged. Law enforcement had to “stand up and be counted”, he said.

Mr McCaffrey alleged that the gang who carried out the attack came from 40 kilometres away and “work for money”.

“They have no beef with the directors of Quinn Industrial Holdings, so undoubtedly they were paid to carry out this task,” he said.

In an interview with RTÉ’s Prime Time, Mr Lunney’s brother Tony, also a QIH executive, spoke emotionally about not knowing whether his brother was inside his burning car when it was set ablaze by the gang after they abducted Mr Lunney last month.

Mr McCaffrey said Mr Lunney was recovering from his physical injuries, including lacerations and a leg broken in two places that has been fixed with a pin.

“The physical injuries will heal but it will be a long way back after that ordeal,” he said.