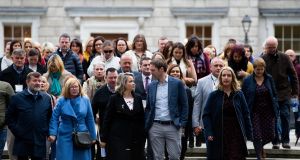 Taoiseach Leo Varadkar’s claim during his Dáil apology on the CervicalCheck controversy that women were subject to “deceit” has caused concern among senior staff within the health service, according to sources.

Delivering a formal State apology for the “litany of failures” in the cervical screening programme, Mr Varadkar said “we are sorry for the humiliation, disrespect and deceit” meted out to the hundreds of women affected by the controversy.

This is the first time a Government minister has said “deceit” was involved.

Northern Irish public health doctor Gabriel Scally was highly critical of CervicalCheck in his Government-commissioned report published last year, but made no mention of deceit and insisted there was no evidence of any cover-up.

Health sources said the Taoiseach’s use of the word has caused considerable dismay among senior staff, including those in screening services. His admission could make it more difficult for the State to defend future court cases taken by women suing the service, it is claimed.

A Government source said the use of the word arose from discussions that had taken place with some of those affected, who were concerned about the explanations they had been given.

The CervicalCheck controversy erupted last year when it emerged hundreds of women with cervical cancer had not been told of a subsequent audit of their smear tests. In many cases, the audit produced a different test result from the original smear, meaning their cancer might have been treated differently. Over 20 of these women have died.

Mr Varadkar said they knew cancer screening programmes could not detect all cancers. “We also know that many failures have taken place.”

He also apologised for the failure to tell the whole truth and to do so in a timely manner.

“We are sorry for failures of clinical governance; failures of leadership and management; failure to tell the whole truth and do so in a timely manner; the humiliation, disrespect and deceit; the false reassurance; the attempts to play down the seriousness of this debacle.”

The 221+ CervicalCheck Patient Support Group, which represents many of the women affected by the controversy, described the Taoiseach’s apology as “a watershed moment” with “huge significance”.

“It is a first step in the process of rebuilding confidence in the capacity of the State to put the patient first in the delivery of public healthcare generally, and for women’s health specifically.”