Regina Doherty announces €150,000 in funding for establishment of judge-led group 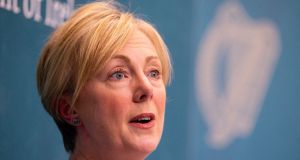 Minister for Social Protection Regina Doherty will establish a judge-led group to examine how to improve the enforcement of child maintenance payments.

The Minister has received €150,000 in funding allocated to examine international best practice on maintenance payments by liable relatives and how to ensure “better outcomes” for families in Ireland.

Currently lone parents are forced to go to court to seek maintenance orders from another parent.

Speaking for Ms Doherty, Minister of State Finian McGrath said that “no one party has a monopoly on caring” or on the best way of remedying the challenges faced by families seeking maintenance payments.

Mr McGrath was responding to a Sinn Féin private member’s motion in the Dáil calling for the establishment of a statutory child maintenance service with sufficient enforcement powers and links to the Revenue Commissioners.

Introducing the motion the party’s social protection spokesman John Brady highlighted the case of domestic abuse survivor and campaigner Jessica Bowes who took her former partner to court to pursue maintenance payments as directed to do by the Department of Social Protection.

A week later she was violently assaulted by her former partner and suffered near fatal injuries. “That was the price she paid,” Mr Brady said.

The motion calls for the Government to fund the research into examining best international best practice on “determining, collecting, transferring and pursuing child maintenance payments”.

Mr Brady said the motion was supported by the two leading campaign groups on the issue, One Family and Spark.

Forced to go to court

“Courtrooms are no place for child maintenance payments to be determined,” the Wicklow TD said. “That is the bottom line. The current process involving the court service simply does not work.”

He said a lone parent who applies for the one parent family payment has to prove they have sought maintenance from the other parent in order to receive and maintain their social welfare supports.

The lone parent is not entitled to the payment unless they can prove they have sought maintenance and they are forced to go to court.

He added that a court summons for maintenance payments cannot be issued without an address for the other parent “and that is not always possible”.

Sinn Féin health spokeswoman Louise O’Reilly said that when she has to tell constituents seeking maintenance that their only recourse is through the courts “you can see the fear in their faces”.

Referring to the State apology earlier in the Dáil to women affected by the CervicalCheck scandal, Ms O’Reilly said “numerous references were made to women being dragged through the courts and how adversarial it is”.

She said “nobody wants to go through the adversarial process even when they are in the right”.

Mr McGrath said the Government would abstain on the issue but Fianna Fáil spokeswoman on children Anne Rabbitte said that if instead Mr McGrath had said they would support the motion that would show “real commitment” to addressing the issue.