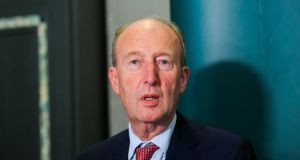 Committee which upholds standards in the Dáil did not apply any sanctions in Shane Ross’s case . Photograph: Gareth Chaney Collins

Minister for Transport Shane Ross mistakenly voted on behalf of Cabinet colleague Katherine Zappone when she was not in the chamber last year but immediately contacted Dáil personnel to inform them of his error.

Mr Ross sat in Ms Zappone’s seat in January 2018 by mistake when a vote was taken on a Bill he had championed, the Road Traffic (Amendment) Bill.

A spokeswoman for the Minister said he had pressed the button on Ms Zappone’s chair and then realised he was sitting in the wrong seat.

He had then transferred to his own seat and cast his own vote. Within the sixty second window, he had tried to cancel the vote he cast on behalf of Ms Zappone. But instead of cancelling it, the vote was recorded as a ‘Níl’ or No. The effect of that was the record would have shown the absent Minster for Children had opposed Mr Ross’s Bill.

The spokeswoman said that immediately upon realising his error, Mr Ross had contacted officials in the chamber to alert them to it. The error was then corrected.

She said the case was similar to that of Fianna Fáil TD Lisa Chambers who sat in the seat of a colleague Dara Calleary last week and cast a vote from his electronic pad. However, unlike Mr Ross, Ms Chambers did not subsequently inform Dáil officials that she had made the error.

Video footage of the vote shows Ms Zappone’s light turning green and changing from red to green at the very last moment. Immediately upon the conclusion of the vote, Mr Ross is seen moving to the tellers in the centre of the chamber, presumably to inform them of the mistake.

The matter was subsequently referred to the Committee on Procedure, which upholds standards in the Dáil. It decided not to proceed with the case.

The Road Traffic (Amendment) Bill - which has since been enacted - proposed to impose a three-month ban on drivers found with between 50 to 80mg of alcohol in 100ml of blood. The change was strongly opposed by rural Independent TDs including Mr Healy Rae.

In the Dáil the following Tuesday Mr Healy Rae said: “I want to ask the Taoiseach if it is correct and allowable that one Minister can press another Minister’s vote button. The Minister for Transport, Tourism and Sport, Deputy Ross, pressed the button of the Minister for Children and Youth Affairs, Deputy Zappone, during the vote for his Bill last Thursday,” he said.

Ceann Comhairle Seán Ó Fearghaíl replied that it would be dealt with by the Committee on Procedure and Privilege, the committee that upholds standards in the Dáil.

“Will he please come into this Chamber and explain what he was at? He reached across and pressed the Minister, Deputy Zappone’s, button,” repeated Mr Healy Rae. “It is very serious, and everyone is taking a very dim view of it.”

On Tuesday Mr Healy Rae said he was unhappy with the outcome of the process. He said that several months after making the complaint he received a letter from the Committee of Procedure saying the matter was not being pursued. “They said they were not proceeding any further with it. I was not happy about it,” he said.