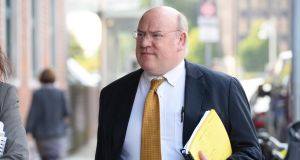 Revenue has applied to the High Court seeking €200,000 in unpaid taxes from a prominent solicitor and former Law Society president.

James MacGuill, who operates practices in Dundalk and Dublin and sits on the Legal Services Regulatory Authority, accepts he owes the unpaid tax but says it relates to income he has earned but has not yet received.

He said any judgment against him would be “fundamentally unfair” and could damage his practice. This would make it more difficult for Revenue to recover the money, according to an affidavit opened in court last week.

Mr MacGuill argued his typical client was unable to pay their legal fees. As a result they must rely on criminal legal aid schemes or, in civil cases, wait for their costs to be awarded at the end of a case.

The solicitor claimed this meant he was taxed on income often many years before he received the money, causing “immense cash flow difficulties”.

Mr MacGuill said he also intended to sell his Dublin office on Charles Street to help pay his tax bill.

The State has not paid out the legal aid fees because Mr MacGuill does not have a tax clearance certificate due to his outstanding tax bill. He said this leaves him in a “catch 22” as he cannot pay Revenue until the State pays him, and the State cannot pay him until he pays Revenue.

The solicitor, who was president of the Law Society in 2007-2008, asked for an adjournment to see if a “limited-purpose” tax clearance certificate could be issued so he could receive his legal aid fees.

At a hearing last week, Mr Justice David Barniville agreed to adjourn the matter to January 2020 to give Mr MacGuill “an opportunity”. Revenue consented to the adjournment.

On the same day the court struck out another application for judgment by Revenue against the solicitor, relating to a different tax year, after hearing MacGuill had now paid the amount owed.

The judge also offered to step down from the case as he knew the defendant professionally and personally. However, neither Revenue nor Mr MacGuill objected to him hearing the case.