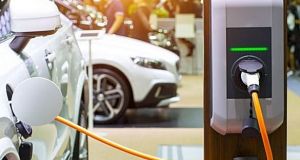 Industry sources expect numbers of electric vehicles to grow ‘once the infrastructure is there’.

A number of drivers of electric vehicles have found they are unable to register for the ESB eCars charging system which came into place on Monday.

Electricity has been free at eCars charging points since the network was rolled out from 2010, but now charges are in place for use of fast-charging points which typically charge a car from zero to 80 per cent in about 30 minutes.

Slower, or standard charge points which are typically located at the side of the street will remain free to use until next year.

Both systems are operated by “access cards” which the user uses to swipe a sensor at charging machines.

In advance of the introduction of charges eCars has been emailing users telling them “from Monday 18th November you will only be able to use the fast chargers if you have signed up”.

Asked about the glitch which prevents holders of non-numbered cards from signing up, a spokesman said the number was “miniscule” and it was possible for the motorist to apply for a replacement card.

The spokesman also said a new app would be rolled out in a number of weeks allowing motorists to use their smartphones instead. Meanwhile, drivers may access a charge using the eCars website, or telephone the helpline and pay over the phone.

The charge by Cars is 33 cent per kilowatt hour on a simple pay-as-you go basis. Or on a subscription basis, with a €5 per month membership fee, a reduced charge of 29 cent per unit is available. Those who sign up before the end of November will be offered the subscription rate without the membership fee for a year.

The Sustainable Energy Authority of Ireland estimates that electricity can be up to 70 per cent cheaper than fossil fuels, when using home electricity. While public charging is designed to be more expensive than home charging in many cases, it can still work out about half the cost of fossil fuels.

The move to charging for charging has been welcomed by firms in competition with the ESB who plan to invest heavily over the coming year. Ionity 350kW chargers are already in place at Circle K stations in Cashel, Tipperary and Gorey. Four additional locations with up to six charge points each are built on the M1, M6 and M7 motorways.

In addition EasyGo, which has more then 300 standard or “slow” chargers, and seven fast chargers is set to expand its fast-charging points by 100 next year.

Gerry Cash of EasyGo said it has not been practical up to now to roll out large numbers of chargers as the ESB was giving away free electricity. But he said the company’s recent deployment at the Mullingar Court hotel and at Kinnegad on the N4 were proving very popular. He also expects numbers of electric vehicles to grow “once the infrastructure is there”.