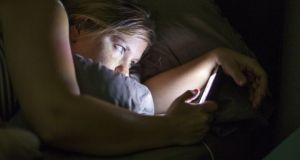 A new study found just over a third of adolescents aged between 12 and 18 years (34 per cent) reported spending more than three hours online per day. Photograph: Adam Hester/Tetra/Getty

Young people who spend three hours or more online each day are more likely to miss out on sleep and have higher rates of anxiety and depression, according to a major study of youth mental health.

The findings are contained in research which captures the views of more than 19,000 young people, aged between 12 and 25 years.

While the amount of time spent online is a concern for some young people, the research also notes that young people are predominantly using social media to enhance and continue friendships and relationships that they have made offline.

Overall, the report shows rates of anxiety and depression are on the rise among young people.

The study was carried out by the UCD school of psychology and funded by Jigsaw, the national youth mental health service, and follows up on a similar study carried out in 2012.

It finds that levels of self-harm are significant across adolescent and young adult age groups, with two in every five young adults having self-harmed.

On a more positive note, numbers of young people drinking alcohol, being bullied in school and stressing about finances have dropped.

The study found there has been a drop in levels of self-esteem, optimism and life satisfaction, but those getting help from supportive adults in their lives has increased.

A lack of sleep, physical activity and heavy social media use and pornography use were strongly associated with depression and anxiety.

Compared to the 2012 study, adolescents and young adults were more likely to be in the “moderate, severe or very severe” ranges for depression and anxiety.

About 40 per cent of adolescents fell into this category, compared to about 33 per cent in 2012.

Levels of self-esteem, optimism and resilience among adolescents have decreased since 2012.

Young people from “seldom heard groups” – such as early school-leavers – showed a particular vulnerability with heightened anxiety and suicide attempts than their age-matched peers.

Joseph Duffy, chief executive of Jigsaw, said while Ireland has made significant progress in encouraging young people to talk about their mental health, it is clear that this alone is not enough.

In the area of sleep, official advice is that teenagers get eight to 10 hours of sleep a night.

Whereas once concerns over body images were more common among females, the study shows this is no longer the case.

Almost two out of three males were likely to report that they had tried to bulk up or maintain muscle mass (63 per cent ), mostly through exercise.

In terms of weight management, 70 per cent of adolescents reported that they have tried to lose weight or avoid gaining weight.

Females were much more likely to report having tried to lose weight (77 per cent) than males (56 per cent).

The methods used to lose/avoid gaining weight were exercising (81 per cent), eating less food or fewer calories (69 per cent ) or taking supplements/pills (3 per cent).