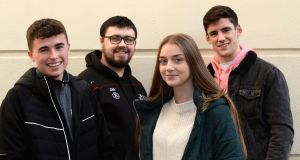 Nathan Henchy and his friends would like to say they’re surprised by the findings of the largest study to date on youth mental health problems – but they’re not.

Life these days, they say, feels like there’s a background din of anxiety over political upheaval, climate change and a relentless digital revolution.

They say they see the evidence of growing levels of anxiety and depression all around them, whether it’s panic attacks, academic pressure or even self-harm and suicide.

“These days, we’re not shocked by suicide anymore,” says Henchy (18) from Tullamore, Co Offaly. “Not necessarily our age, but young adults where we live . . . during the summer it was like nearly every week that so-and-so had died.”

She feels younger generations may be more open about discussing mental health issues – but, in many cases, lack the resilience to cope with everyday pressures.

“You also see how people get very easily stressed nowadays by things like schoolwork or tests . . . Even small tests, like the Junior Cert. ”

“I see social anxiety problems and panic attacks a lot, it’s a very big problem in my area . . . it’s scary to see how bad it can get. You could walk into a bathroom and someone feels they can’t leave it.”

Their feelings are echoed in a new study which captures the views of more than 19,000 young people on mental health and well-being.

While there has been a drop in levels of self-esteem, optimism and life satisfaction, those getting support from supportive adults in their lives has increased

It shows rates of anxiety and depression are on the rise among young people and that levels of self-harm are significant across the adolescent and young adult age groups, with two in every five young adults having self-harmed.

On a more positive note, numbers of young people drinking alcohol, being bullied in school and stressing about finances have dropped.

And while there has been a drop in levels of self-esteem, optimism and life satisfaction, those getting support from supportive adults in their lives has increased.

When it comes to whether these issues are actually more prevalent among this generation, or whether there is simply greater awareness, there are mixed views.

But what they all agree on is that younger people are growing up in a far different world compared to previous generations.

“Even in school, you see students walking down corridors in a group, but they’re not talking . . . they’re constantly on phones, so there’s that disconnect and they’re not listening to what’s happening around them.”

Tomas Griffin (17) from Tullamore agrees. “It’s much easier for young people to be anxious: we can see everything and access everything,” he says.

“You can’t turn anywhere without finding out something new and awful about the world. You can either be upset and angry and afraid – or you can ignore it and feel awful for ignoring it,” he says.

In their own lives, he says, it feels like there is always something to worry about just around the corner.

“If we’re thinking about the Leaving Cert, it’s not just about getting the points, but it’s where will I live next year, will I get a job, will I be able to have kids, can I afford that . . . and then there’ s eco-anxiety. And there’s an attitude of, maybe things will be beyond saving in any case.”

A bugbear for some is that this is a generation that has been encouraged to be more open about mental health issues.

Yet, when they voice their opinions, they are labelled “snowflakes” and told of how previous generations had it even tougher.

“When you explain to older generations, it’s seen as just anxiety. Get over it,” says Mannion. “But you need to be affected to really explain how hard it is . . . they don’t fully understand what’s going on.”

So, how can we help younger people to cope?

Murray says using the education system to teach resilience and how to handle stress and anxiety is one good approach.

While young people might have access to career guidance in school, if they need professional mental health support it can involve a long journey to an impersonal clinical setting

Making supports such as the child and adolescent mental health services available in school is important, adds Mannion.

She feels that while young people might have access to career guidance in school, if they need professional mental health support it can involve a long journey to an impersonal clinical setting during school hours.

Parents will doubtless worry about the report’s findings. Should they feel alarmed about what kind of pressures are facing younger people?

“Yes, parents should be worried – the report doesn’t lie,” says Griffin. “We’re past the point of putting positive spins on it.

“There are problems with young people. They’ve been ignored this long. If we keep going, there will be a crisis . . . we’ve identified where the problems are – we’ve done everything we can do as young people.”