Is a fully inclusive school system right for Ireland?

Divisions on whether mainstream classes should accommodate all special needs pupils 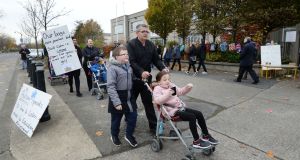 Philip McGiff and his autistic daughter Nicole, who is six and has no school place. Photograph: Alan Betson

Six-year-old Nicole McGiff should have started primary school last September. Instead, she sits at home each day and watches Mickey Mouse and Princess Sofia on her tablet.

Her father Phillip says he applied for 10 schools on Dublin’s southside in the past year and received 10 rejections.

“It was the same response,” he says. “We’re full and we don’t keep waiting lists, so reapply next year.”

The last thing I want for her is to spend hours on a bus every day. It’s not fair

He believes, however, there was another reason why schools didn’t have a place for her: she is autistic and has an intellectual disability. She is non-verbal, has a specialised diet and doesn’t interact with other children. “It makes me feel angry,” says McGiff, who attended a recent protest over the lack of education for special needs pupils in the Dublin 12 area.

“You hear of other children travelling miles and miles to get to special schools. The last thing I want for her is to spend hours on a bus every day. It’s not fair – the system isn’t fair.”

It’s a pattern replicated in many different parts of the country. Parents of children with special needs are often unable to access education in their locality. In many cases, children end up travelling long distances to access a special class or special school.

The National Council for Special Education, the State’s body responsible for organising special education, believes it may have a solution to help improve access and outcomes for such children.

On Tuesday, it will issue a report recommending that the Minister for Education commence legislation which would prohibit schools from taking into account a child’s academic ability in their admissions policies.

The National Council for Special Education (NCSE) says such a step is needed to help remove “soft barriers” which parents of special needs pupils face when trying to find school places for their children.

It has also taken the dramatic step of warning that Ireland may be in breach of a UN convention by “segregating” up to 16,000 special pupils into special schools and special classes attached to mainstream schools.

The council says the State should consider moving to a “total inclusion” model, where all children are placed in mainstream schools, regardless of their level of disability.

How on earth can anyone say that a bustling mainstream class with 30 students is the right place for a child with severe and profound disabilities...?

It says all children should be educated together, with the right supports in place, unless there is strong evidence to support a different approach.

Among many professionals and campaigners, however, there is scepticism over whether such an approach can work.

Many campaigners and teachers worry that children with complex needs could end up much worse off.

“How on earth can anyone say that a bustling mainstream class with 30 students is the right place for a child with severe and profound disabilities and sensory issues?” says one educational psychologist, who declined to be named.

Another education expert questions whether it would have a negative impact on the education of mainstream children.

Others speculate that such changes would be a way of cutting or containing the rising cost of the special-needs sector, which now accounts for almost a fifth of the entire education budget.

Teresa Griffin, the NCSE’s chief executive, says she had reservations herself at the “total inclusion” model until she saw it in action first hand in the Canadian province of New Brunswick.

Jody Carr, a former minister for education in the province, says its decisions to move to this model were based on evidence that students in special settings achieved less favourable longer-term outcomes than their peers in mainstream.

He says the system works by individualising education for pupils, along with strategies, goals, outcomes, targets and educational supports necessary to ensure their success in learning.

Children don’t stay all day every day in the same class, he says. Students may be withdrawn at certain times for support.

“I would encourage parents, teachers, students and other partners to to consider the next steps needed to educate all your students together in their local school,” he says.

“Not only because this the right thing to do – but also because it is now your country’s legal obligation under the UN Convention on the Rights of People with Disabilities.”

Many teachers and parents of special needs, however, say that while the idea sounds laudable, there are too many practical barriers.

Many children in the Irish system, they say, cannot access the supports and therapeutic input they need right now; moving all special education into mainstream settings, they say, would overwhelm schools and result in a worse education service.

They also point to stumbling blocks such as the large number of smaller schools in Ireland, inadequate teacher training and patchy access to crucial supports.

Not everyone is critical, however. Some schools, such as Gaelscoil Baile Brigin in Balbriggan, have a policy which is similar to “total inclusion”.

I’d be tormenting her by putting her in a big classroom . . . All I know is that we have to open more schools and special classes

All its special-needs pupils have a “base class”, and move out to special classes only when they require different interventions.

Their home, however, is very much in the mainstream class: their art is on the walls and they have a seats with their names on them.

As for Philip, he can’t see how his daughter could cope in a mainstream class with dozens of other pupils.

However, he accepts that the current system isn’t working either and some kind of change is needed.

“I’d be tormenting her by putting her in a big classroom . . . All I know is that we have to open more schools and special classes. As I see it, mainstream schools just aren’t interested. My daughter has the right to be educated – and to be educated in her community.”