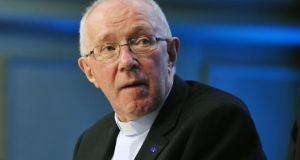 Direct provision should be replaced with a “more respectful system’’ for migrants, the Catholic Bishop of Clonfert Dr John Kirby has said.

“Pope Francis has made the care of migrants one of his main initiatives,’’ he told a congregation of Irish emigrants in London.

“In Ireland the system of direct provision for migrants arriving from very difficult situations is a very unsatisfactory arrangement and we need to change it,” he added.

Dr Kirby, who is chairman of the Bishops’ Council for Emigrants, was speaking at a Mass at Sacred Heart Church, Kilburn, London, to mark the 60th anniversary of the setting-up of the Irish chaplaincy when priests were sent to the city to work with the Irish who had emigrated.

Ireland’s history, he said, was very much tied up with migration.

There was the outward movement of people beginning in the early years of the 19th century and culminating in the huge outflow at the time of the Famine.

A further wave of emigration took place in Ireland in the early years of independence at a time of recession and hardship in the 1940s and 1950s, he added.

“Many of you here in this church in Kilburn are Irish-born, or are descended from Irish-born people of that period,’’ he said. “Your work and life here have contributed to your own prosperity and to the prosperity of this country.’’

He said the Irish economy had been helped through the practice of emigrants sending postal remittances to assist families back home.

Sadly, Dr Kirby added, not everyone was able to contribute to life in the new country or in the old. There were Irish people in London who continued to need help, and the Irish chaplaincy service existed precisely to assist them, he said.

It remained an agency of the Irish Catholic bishops and was also supported by grants from the Department of Foreign Affairs and the Government, said Dr Kirby.

He said many Irish priests served in the chaplaincy, with some playing a significant part in the foundation of the Irish Council for Prisoners Overseas.