In care or homeless since 11, Christopher Comerford (34) finally has a home 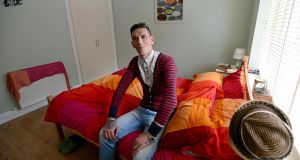 A shortage of one-bedroom homes in Dublin is stalling delivery on a key commitment in the Government’s plans to tackle rough-sleeping and homelessness.

Just one third of the “Housing First” tenancies committed to in the Government’s Rebuilding Ireland plan for 2017 have been delivered, according to figures from the Dublin Region Homeless Executive (DRHE).

Under Housing First, long-term homeless individuals are placed directly into permanent housing, with a suite of “wrap-around” supports, rather than going through the traditional “staircase” model of hostels and supported housing to prepare them for independent housing.

Despite a commitment in Rebuilding Ireland to “triple the targets for tenancies to be provided by Housing First teams in Dublin, from 100 tenancies to 300 ...in 2017”, just 105 have been delivered.

In a statement, the DRHE said: “The biggest obstacle to continued progress on this important initiative is the shortage of suitable one-bedroom dwellings and the significant demand/need for such accommodation from other categories of applicants on the housing waiting list, eg other single persons and some single-parent households.”

The executive has appointed a dedicated manager of Housing First “which will give this important service the extra momentum that was needed”.

Among the 105 individuals to have benefitted from Housing First is Christopher Comerford (34), originally from Dolphin’s Barn, who moved into a one-bedroom apartment this month. Having been in and out of homelessness since he was 11, he says: “You have no idea what is like to have your own place, a home.”

He was taken into care in early 1995 and placed in a residential unit where, he says, some staff were openly drinking, and introduced him to alcohol. From there he was placed in a care unit in south Co Dublin, aged 12, where he stayed for three years.

“I was having problems in school, started sniffing butane gas and getting involved in low-level crime. Looking back, I’d like to give that child as I was a smack, but at the time the drugs and alcohol were an escape. I was hurting a lot inside. At that age, around 13, everything is bottled up, you don’t talk about your feelings.”

He was expelled from school, he says, two weeks before his Junior Certificate, as he gave some gas to girls in his class, who when caught with it “ratted me out”. He says he had given it away as he planned to come off it following the death of another boy from sniffing it.

He was also then asked to leave the residential centre. He began sleeping rough and hanging around mainly with other young homeless people in the city centre.

“We used to sleep behind these massive big flower-pots, just beside the Dublin City Council offices on the quays. About 30 of us - the youngest about 13 and the oldest about 19. I remember thinking, ‘If I die here on these streets, no-one will give a shit.’ I didn’t feel like I mattered to anyone. That hurt.”

He was smoking heroin by age 17, and came into contact with homelessness campaigner Fr Peter McVerry around this time. “He became like a father figure to me; stopped me killing myself a few times.”

He spent multiple spells in prison from the age of 17, and says each time he was in prison he’d “make all these big plans, to get off drugs, get an education” but each time he felt “thrown back into the lion’s den”.

“You’d get no help leaving prison, nothing. Things started getting in on top of me. I’d get depression, I’d start using.”

More recently, he has been in hostels and overcoming his addiction issues. In August, while walking on Talbot Street, he got a call from his key-worker with the Peter McVerry Trust, telling him he had been selected for a Housing First apartment. “It was like I was winning the Lotto. If I could have done cartwheels up and down the street I would have.”

He pays “about €35 a week” rent and is planning now to go to college, and thanks “Jesus Christ my saviour for this”.

“One of the neighbours, an old lady, she stopped me and said, ‘You’re welcome here. You deserve it.’ I know people here. I can put down roots here. It’s home. It’s an amazing feeling.”