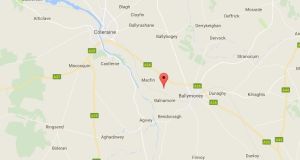 The Taughey Road in Ballymoney where the fatal collision occurred.

A teenage boy has died after his scrambler bike collided with a car in Co Antrim on Saturday evening.

Marcus Forsythe, who was 15 years old, died after his bike collided with a car on the Taughey Road in Ballymoney after 4pm on Saturday.

A second passenger on the scrambler was treated in hospital for injuries, which are not thought to be life-threatening.

The occupants of the car were treated at the scene for shock.

Police in Northern Ireland have appealed for witnesses to contact them in Coleraine on +44 28 7034 4122.