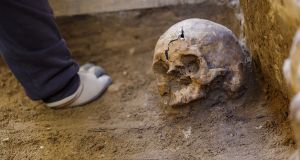 Skull found at the entrance of the chapel.

Spanish archaeologists searching for the remains of Red Hugh O’Donnell have discovered two coffins, a skull and a complete body at the site they believe is his last resting place.

The excavation of Constitution Street in Valladolid in northwest Spain has revealed the walls of what is thought to be La Capilla de las Maravillas (the Chapel of Wonders ) where O’Donnell was buried in September 1602.

On Tuesday, the seventh day of the dig, the Mayor of Valladolid Óscar Puente posted a tweet. It showed a photograph of the excavated site with a human skull and bones and the caption: “In the Chapel of Wonders, in the exact place where Red Hugh O’Donnell is believed to have been buried as well as Christopher Columbus, some remains and two coffins have appeared.”

Both Columbus and Red Hugh were buried in the chapter (chapel) of the Franciscan monastery which disappeared in the middle of the 19th century.

The remains of Columbus were moved to Seville, but the coffin which has been discovered may be the original one in which he was buried.

The archaeologists, who are employed by the City of Valladolid, began their dig on Monday last week.

Their communications manager Carlos Burgos said the “importance of the excavation is growing every day” and though the body has yet to be identified, he added that “we are certain that here is the burial place of a great Irish leader and part of the history of Spain too”.

Red Hugh died en route to the city, then the capital of Spain, while waiting for a response from Spain’s King Philip III to letters imploring him to send another army to Ireland to fight against the English.

Red Hugh and his father-in-law Hugh O’Neill instigated the Nine Years War (1594-1603) which came close to ending the English presence in Ireland, but eventually foundered.

Red Hugh’s Irish and Spanish army was defeated at the Battle of Kinsale in early 1602 and he fled to Spain. Though the king never did provide the help sought, he gave Red Hugh (who died aged just 29) a royal funeral, as outlined in the Annals of the Four Masters.

“His body was conveyed to the king’s palace at Valladolid in a four-wheeled hearse, surrounded by countless numbers of the king’s state officers, council, and guards, with luminous torches and bright flambeaux of beautiful wax-light burning on each side of him,” it said.

“He was afterwards interred in the monastery of St Francis, in the chapter precisely, with veneration and honour, and in the most solemn manner that any of the Gaels had been ever interred in before.”

It is the chapter, the part of the chapel where monks gathered for meetings, that the archaeologists believe they have found during their excavation.

Visitors have come to Valladolid over the years looking for Red Hugh’s remains without success. The poet Thomas McGreevy wrote in his poem Aodh Ruadh Ó Domhnaill about it: “And all Valladolid knew/ And out to Simancas all knew/ Where they buried Red Hugh.”

The catalyst for the current dig was a visit by Donegal man Brendan Rohan to the city last year. Mr Rohan persuaded city authorities to conduct the excavations.

On Monday, the archaeologists discovered a wall which they believe was the perimeter of the Chapel of Wonders which was a site about 80sq m in size.