Some departments could run out of cash before the end of July, Minister warns 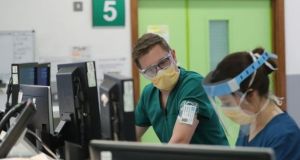 The North’s Department of Health on Tuesday reported no new deaths from coronavirus for the first time since March.

It follows no deaths being reported in the Republic on Monday, which Taoiseach Leo Varadkar described as a “significant milestone”.

“We all have been waiting for a day like this,” said the North’s Minister for Health Robin Swann. “I do believe it is a clear sign of the progress that has been made in the battle against coronavirus.”

Mr Swann however emphasised that there were no grounds for complacency and said that “sadly there will be more lives lost in the days and weeks ahead”.

“If people get it into their heads that this emergency is over the consequences will be catastrophic,” he warned.

Nonetheless, both he and Deputy First Minister Michelle O’Neill saw the latest figures as encouraging. “There is a clear downward trend in the rolling average number of cases and deaths that we are reporting. That is positive and is a testament to each and every single person who has remained at home in recent months and abided by the guidelines,” said Mr Swann.

Ms O’Neill described the news as “heartening” while adding: “Let’s keep working together to have more days like this. This battle is not over and we cannot afford for a single person to become complacent to the threat posed by this deadly virus.”

Mr Swann also described Dominic Cummings trip to Durham as “ill-judged” but said people must not become distracted by the controversy around the British prime minister’s adviser.

So far, according to the department’s figures, 514 people have died in Northern Ireland from Covid-19.

The department also reported on Tuesday that 28 more people had tested positive for Covid-19 bringing the total number of confirmed cases in the North to 4,637. A total of 47,529 people have been tested for the virus.

Meanwhile, the North’s Minister for Finance Conor Murphy warned that a number of Stormont departments could run out of money in the coming months due to the Covid-19 crisis.

Mr Murphy told the Northern Assembly on Tuesday that five unspecified departments could be left without cash by the end of July.

This was because of extra spending to meet coronavirus spending commitments, said the Minister.

An additional £1.2 billion (€1.35bn) in funding has been provided to help deal with the virus but still the cash reserves of a number of departments are fast depleting, warned Mr Murphy.

“Our analysis suggests that at least five departments may run out of cash before the 31st of July 2020,” he said.

Mr Murphy said one department could run out of money as early as July 19th.

He made his comments when introducing a technical mechanism in the Assembly authorising continued Executive spending.

The Minister also said that the plan for Brexit to be completed by the end of this year would pose extra financial challenges for the Executive.

Earlier on Tuesday, Mr Murphy told the BBC that Northern Ireland faced into a recession when the pandemic is over and that Brexit would be an added factor.

“What we have to take into account is the impact of Brexit – that was something that was always going to be very economically challenging for us,” he said.

“We recognise inevitably businesses will suffer and jobs may go, but we’re obviously trying to mitigate against that as best we possibly can,” said Mr Murphy.

The Minister also referred to how some departments were not spending their allocations due to the lockdown, particularly on capital projects, and how this could lead to money being reallocated between departments.