Irishman in Britain: Why do the English have such a soft spot for posh people? 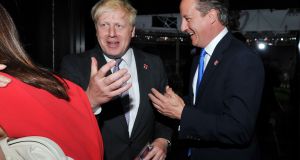 The peasant revolt has begun in the United Kingdom, though it may not look like it. At its helm is Boris Johnson, an Etonian, and his cabinet of hard-right conservatives.

They may not seem like men of the people, but in the Alice in Wonderland world of Brexit, that is exactly what they are. An English working-class revolution against the elites in Brussels, Brexit Britain is backing its indigenous overlords instead. Insurrections typically depose the ruling class, but here the opposite is true, rather than execute the gentry the public has turned the gun on itself.

English people simply have a soft spot for posh people. While uprisings swept countries like France and Russia, anti-monarchist rebellions in England have generally been considered a tad gauche. They had a crack at it once before in the 17th century, when Oliver Cromwell turfed-out Charles I with the Civil War.

Of course, Ireland has a class system of its own, but it’s necessarily covert

This lasted only 11 years before the English realised how much they disliked being a republic, and asked Charles II to return from exile to accept the throne - the execution of his father was written off as a dreadful misunderstanding.

My first encounter with the British class system came as an undergraduate in Trinity College Dublin (TCD). Oxford and Cambridge can’t accept every boarding school old boy that applies so every year a number end up in TCD, considering it to be at least aesthetically comparable.

Known derisively as “Team England”, its members typically spend four years in a bubble within a bubble, drinking and behaving badly like a Primark Bullingdon Club. I once asked an English friend of mine why he didn’t join his compatriots, to which he replied “They wouldn’t have me. I’m merely middle class”.

While perfectly ordinary in Britain, this caste system was baffling to the rest of us and inevitably, integration between Team England and the native Irish proved difficult. During fresher’s week, one triple-barrel-surnamed classmate of mine brought a drinking session to a screeching halt when he remarked that colonisation has ultimately been a good thing for Ireland - he was summarily ostracised.

Of course, Ireland has a class system of its own, but it’s necessarily covert. Tall poppies are treated with contempt and the rich are viewed with suspicion. Irish politicians have traditionally sprouted from old revolutionary dynasties as opposed to economic ones with its leaders at a pains to portray themselves as men of modest means, however illusory this may be.

In Britain however the reverse is true, the upper classes are not just tolerated, but trusted to lead. In the first World War, the British working class died in their millions jumping out of trenches under a hail of bullets while Brahmin generals gave orders from miles away.

As much affection as the British public has for its toffs, the feeling can hardly be said to be mutual

High society suffered steep death tolls too - in a rare case of nepotism working against you it was the sons of the elite who served as junior officers. It was their job to blow the whistle, go first and lead the rest of the men over the top to almost certain death - Eton alone lost more than 1,000 past pupils this way. There’s a grim analogy to be made for 2019, as an Etonian again blows his whistle and leads the public on its latest mission - a no deal Brexit.

Labour have traded power with the Tories over the years, though they have not been able to win a general election since 2005. It’s not difficult to see why ordinary people have lost faith in the left. Jeremy Corbyn’s New Labour predecessors may not have gone to Eton, but they were ultimately no less Jupiterian in their rule.

While their achievements shouldn’t be ignored, neither should their failures. While raising the minimum wage and pumping money into the NHS and education on one hand, on the other they wouldn’t put manners on their friends in the financial system and failed to prevent the economic catastrophe of 2008.

While signing the Good Friday Agreement and helping to end centuries of conflict in Northern Ireland on one hand, on the other they went on to invade Iraq and inflame a whole new wave of sectarian violence in the Middle East.

When weighing this up against Tory rule, perhaps the public can be forgiven for backing the devil they know. Faced with inevitable suffering, maybe there is something comforting in having an Eton rifle leading you into the abyss.

As much affection as the British public has for its toffs, the feeling can hardly be said to be mutual. Boris Johnson’s government - the vanguard of the proletariat - now seems determined to have a no deal exit from the European Union on October 31st. The potential consequences of this - job losses, food shortages - will effect working people worst of all.

On the bright side, Mr Kipling announced this year that it has begun its Brexit stockpiling of ingredients , so in a worst case scenario, Johnson will at least be able to say “Let them eat cake”.

Peter Flanagan is writer and comedian based in London. Read his previous pieces for Irish Times Abroad:

Could Boris be Britain’s first cute hoor prime minister?
Are the British really as xenophobic as they’ve been made out to be since Brexit?
Trying to make Brexit funny when it’s no laughing matter
‘I’m exhausted explaining to British people the geography of their own country’
We’re often the butt of the joke in Britain but we have it much easier than others
We’re entitled to stay in Britain after Brexit, but we could be better off at home