Boris Johnson has the charm and depth of an overcooked souffle 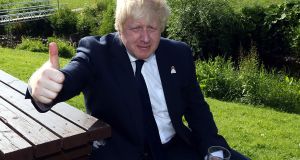 ‘Stop treating all this like a game,” a frustrated Ken Clarke, veteran Tory MP, told Boris Johnson on the floor of the House of Commons recently.

Clarke’s frustration with Johnson’s Oxford Union theatrics and his high-risk game of let’s-see-who-blinks-first was understandable. But what Clarke may not have appreciated is that Johnson can’t help himself. He can’t stop treating it like a game, because as far as he’s concerned, it is a game. He is a smirking dilettante who fancies himself an intellectual, but who has the charm and depth of overcooked souffle.

There is an accepted truth in political commentary that power corrupts, but power also reveals. The idea, espoused by biographer Robert Caro in his biography of Lyndon Johnson, is that when a politician gets the top job, we finally discover who that person really is. “Nothing discloses real character like the use of power,” wrote Robert Green Ingersoll, a 19th century American writer, of Abraham Lincoln. “If you wish to know what a man really is, give him power.”

I’d go further: the person in power also reveals the nature of the society. Johnson’s stint as prime minister hasn’t taught us anything new about him – but it has revealed a lot about the fragility of British democracy. And it has taught us about the nature of the society that allowed him to wriggle his way, an eel on an upstream current, to the top. It’s no coincidence that he came to power at a time when drama, outrage and spectacle carry greater social currency than nuance, empathy and self-reflection.

Some commentators have made the mistake of treating Johnson as an enigma. But really there is no enigma. He is exactly as he has always appeared: glib, needy, hungry to be the cleverest one in the room. As the 1984 Kit Kat advert suggested, he should go a long way.

Imagine if you had told someone, 35 years ago, that there would come a time in our history when “influence” would be measured by points awarded by an invisible audience of judges to a screen you’d carry in your pocket, and that if you managed to rack up enough, you could even get paid for them. They would have told you that was utterly absurd. Yet here we are. He is an absurd leader for absurd times.

In the case of another leader closer to home, Leo Varadkar’s ascension to Taoiseach hasn’t revealed anything about him we didn’t already know. But it has revealed a lot about what we appreciate in our taoisigh. That might be summed up as versatility; someone who is either unformed or slippery enough to allow us to project on to them whatever we want them to be at any given moment. Maybe it’s because, as a relatively young nation, we’re still not sure who we are, and we like our leaders to be equally malleable.

The secret of a successful taoiseach is not to be all things to all people, but to be enough things to enough people. Bertie Ahern was very good at that. So was Charlie Haughey. Enda Kenny, was too. And Varadkar, as the “gay son of Indian immigrants”, can be a symbol of a more progressive Ireland. Or he can be a hardworking, sometimes gaffe-prone embarrassment, or a smug right-wing ideologue, or a brilliant protege, or a Brexiteer-baiting saviour of Europe, or a socially awkward kid in the school yard who, when he’s around other people he considers cool, suffers from being a try-hard.

Maybe all of these are a little bit true; maybe none are. But they’re all also projections. Arguably, what is most interesting about Varadkar isn’t the man behind the mask. There is no mask. It’s what he says about us, and how he reflects the images we want to project to the rest of the world.

We get the leaders that manifest our institutions and our values. And most of the time, as Runciman says, they have told us exactly who they were from the beginning. Unfortunately, sometimes terrifyingly, we get the leaders we deserve.