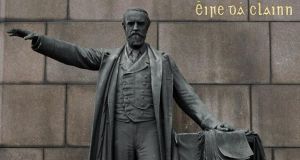 Under Charles Stewart Parnell’s leadership, the Irish Party adopted obstructionist tactics that brought the work of the Commons to a standstill for days on end. Photograph: Dara Mac Dónaill

The unlikely reference to Charles Stewart Parnell by House of Commons leader Jacob Rees-Mogg was apposite, given that the Irish question, in the shape of the backstop, has so convulsed British politics.

First Theresa May and now Boris Johnson have seen their plans for taking the UK out of the EU upended by the vexed issue. So it should probably be no surprise that the memory of the Irish politician, who disrupted the sedate procedures of the House of Commons in pursuit of Home Rule nearly a century and a half ago, should be invoked today.

Under Parnell’s leadership, the Irish Party adopted obstructionist tactics that brought the work of the Commons to a standstill for days on end. The most famous filibuster lasted for 41 hours in 1881 but the Irish MPs made a nuisance of themselves day in and day out in pursuit of their political goal.

Such is the hypocrisy of the wealthy Brexit supporters who, unlike millions of their compatriots, are immune from the damage wrought by their policies

Rees-Mogg referred to Parnell in the context of the manoeuvre by a cross-party group of MPs to seize control of parliament to prevent a no-deal Brexit. “The approach taken today is the most unconstitutional use of this House since the days of Charles Stewart Parnell, when he tried to bung up Parliament,” bewailed the minister.

Brexit Party leader Nigel Farage subsequently staked his own claim on the memory of Parnell, revealing that he has long been an admirer of the Irish politician for the way he disrupted the British parliament in pursuit of Home Rule. Farage pointed out that, in the same way, he had tried to disrupt the European Parliament.

It is a compliment to Parnell – back-handed or otherwise – to suggest that his impact continues to resonate today. But beyond that, the politics espoused by Rees-Mogg and Farage shows no sympathy with Ireland. That said, Rees-Mogg retains a more contemporary interest here – as part owner of a hedge fund which moved some operations to Dublin to retain the benefits of EU membership. Such is the hypocrisy of the wealthy Brexit supporters who, unlike millions of their compatriots, are immune from the damage wrought by their policies.

1 Election 2020: 10 key questions to ask candidates on your doorstep
2 Fianna Fáil may have just pressed the pause button on the property market
3 UK to prioritise EU trade deal over one with United States
4 Toyota’s hot Yaris gets Irish input
5 Election 2020: Peter Casey to stand in both Donegal and Dublin West
Real news has value SUBSCRIBE