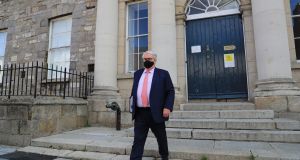 Chief Justice Frank Clarke after members of the Supreme Court and the board of the Judicial Council met ahead of the publication of the Denham report into the attendance of Supreme Court judge Séamus Woulfe at an Oireachtas Golf Society event in Galway in August. Photograph Nick Bradshaw

The controversy surrounding the attendance of Supreme Court judge Séamus Woulfe at the Oireachtas golf dinner has brought into sharp focus the serious consequences of the delays in fully implementing the 2019 Judicial Council Act.

A clear structure for addressing issues concerning the conduct of judges has not been in place for more than a century despite a number of controversies engulfing the judiciary. The delay in commencing the conduct provisions of the 2019 Act led to a situation this August where the Supreme Court asked a former Chief Justice to carry out a review which had no statutory basis, resulting in a report the court itself could not publish or implement.

Under the Act, the Judicial Conduct Committee, created last July, has up to 12 months to compile guidelines to address complaints about judicial conduct.

The Council then has up to a year to consider whether to approve the guidelines, which cannot be applied to situations that predate their adoption.

Once the Judicial Conduct Committee is operable, complaints about judicial conduct will be a matter for it to address. If a complaint is deemed admissible, the JCC may hold an inquiry and can issue a reprimand or other sanction. If a situation is sufficiently serious, the JCC can make recommendations to government on sanctions up to impeachment.

An irony of the inquiry into Mr Justice Woulfe’s conduct is that Susan Denham, who persistently called for enactment of the Act during her years as Chief Justice, found herself carrying out the review into the Woulfe matter due to absence of the necessary guidelines.

Her report, published by the Judicial Council, may have averted an immediate crisis for the Supreme Court but some believe the judge’s attendance at the golf dinner has inflicted some damage on the public perception of the court, and of the judiciary in general.

The public outcry over the golf dinner had lead to the resignation of agriculture minister Dara Calleary and European commissioner Phil Hogan. Others, including Mr Justice Woulfe, a former attorney general appointed to the Supreme Court last July, were criticised over their attendance.

Mr Justice Woulfe issued a statement on August 21st saying he apologised “unreservedly” for his attendance and was of the impression the event organisers had made sure it would be in compliance with the Covid-19 guidelines.

Mr Justice Woulfe’s retention of lawyers following the announcement of the review underlined his strong belief there was no basis for resignation and he also engaged an engineer who provided a report to Ms Denham concerning the hotel’s compliance with the Covid-19 guidelines.

His retention of lawyers also intensified concerns within the Supreme Court about the status of the Denham report. Because it had no statutory basis, there was concern, should it prove unfavourable to the judge, of the possibility of legal action if it was published. The concerns included who would be the respondents to any legal action and whether Ms Denham would require to be indemnified and, if so, by whom or what entity. Equally, it was understood that a failure to publish would cause public disquiet.

The Supreme Court’s decision to forward the report to the Judicial Council was an effort to get around that difficulty and Ms Denham was also provided with an indemnity.

In the report, Ms Denham expressed the opinion Mr Justice Woulfe should not have attended the golf dinner and that he had not considered the propriety of a judge of the Supreme Court attending a celebratory dinner in a public place while there is a pandemic in the State.

She was also of opinion that “significant mitigating factors”, including the judge being newly appointed, not having had the benefit of an introductory programme and the absence of judicial guidelines or a judicial code of conduct to assist him, meant he did nothing involving impropriety such as would justify calls for his resignation from office. Such a step would be unjust and disproportionate and she considered it would be open to the Chief Justice to deal with the matter by way of informal resolution.

The Supreme Court has said it accepts the report’s conclusions and recommendations and the resolution process will commence.