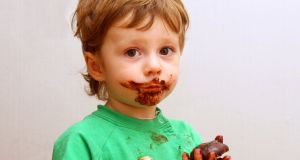 Children under the age of four should be restricted to just one square of chocolate a week as a treat, new health guidelines suggest. Photograph: iStock

Children under the age of four should be restricted to just one square of chocolate a week as a treat, new health guidelines suggest.

The first ever national health eating guidelines for children from birth to the age of four recommends that treats should only be given in “TINY amounts” and the leaflet with the new guidelines emphasises the words “tiny” in capped letters.

As an alternative to a square of chocolate, a child can have three crisps or half a plain biscuit or three jelly sweets once a week, but not all together.

Safefood chief specialist in nutrition Dr Marian O’Reilly, who was one of those who drew up the guidelines, said parents havebecome used to giving children larger treats than they need.

Population surveys have shown that very young children are getting more nutritionally empty food than is good for them.

“It does appear very small, but it demonstrates how normal it has become for these foods to be part of our diet over the last few generations,” she explained.

“I think back to when I was a child, we would share one packet of sweets between four. That’s unheard of now. We need to get that message out that treats have to be in small amounts.

“Strictly speaking, these shouldn’t be part of a childs’s diet at all. Kids have very small tummies. They need to eat a certain amount of food for growth. If they do eat too many treat foods, they are not going to get the nutritious food they need.”

Dr O’Reilly, who has a four-year-old son, said children “push the boundaries” when it comes to demanding treats and it is up to parents to resist.

Instead, the Government guidelines recommend as a snack, cheese with crackers, breadsticks with houmous or a bagel with peanut butter.

The guidelines recommend that new-born children be breastfed up to the age of two and even beyond.

A Vitamin D supplement for very young children should be given between Halloween and St Patrick’s Day to compensate for the lack of sunlight. Vitamin D aids the development of healthy bones and teeth.

Children should be offered a breakfast cereal with added iron most days a week to help them grow. Orange juice, which is rich in vitamin C, can be added to the diet.

Fried food is not recommended for young people and neither are mayonnaise, coleslaw and salad dressings as they also contain oil.

The advice is contained in a24 page booklet. The release will be supported by a digital and social campaign and use of the hashtag #kidspyramid