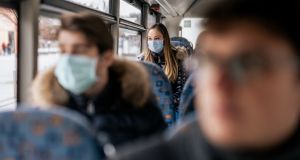 Dr Nabarro explained the recent rise in cases was a result of people moving around. Photograph: iStock

There were 442 new cases and four new deaths related to Covid-19 reported by National Public Health Emergency Team (NPHET) on Thursday after it recommended tightening restrictions on visitors to private households across the country.

The State’s public health team recommended that a maximum of six people from a single household be allowed to visit another household in all parts of the State. It said people can continue to meet socially in other settings, but only with people from one other household.

The team have also not recommended additional restrictions in counties with higher levels of Covid-19 and said other counties will remain at Level 2 for three weeks, with Donegal and Dublin remaining at Level 3. A Cabinet meeting was not needed to approve the tightening in visitor restrictions as such changes are already provided for as part of the Government’s roadmap.

The 442 new cases reported on Thursday is the highest daily cases figure since April 26th.

Dublin once again has the highest number of cases at 170 with 47 in Cork, 28 in Donegal, 23 in Meath, 21 in Galway, 20 in Monaghan, 14 in Clare, 12 in Roscommon, 11 each in Laois and Longford, 10 each in Cavan, Limerick and Tipperary, nine in Kildare, eight in Wicklow, five apiece in Louth and Wexford with the remaining 28 cases spread over nine counties.

Of Thursday’s cases, 54 per cent stem from outbreaks or close contacts of a confirmed cases while 69 have been identified as examples of community transmission.

The reproduction number is estimated to be between 1.2 and 1.4, with the growth rate in cases between 4-5 per cent per day, it said.

NPHET noted a particular concern in relation to trends in indicators of “disease severity” with 119 people in hospital with 20 in critical care. It noted that there were 32 deaths in September.

“While there continues to be a number of counties with particularly high incidence, the NPHET’s main concern now is the overall national picture,” it said.

Nine of the next 10 local electoral areas are in Dublin with the exception of Leixlip in Co Kildare which is on the Dublin-Kildare border and it has a rate of 163.9 per 100,000.

Minister for Health Stephen Donnelly earlier said the public health team are using a combination of different metrics to make their recommendations, not just case numbers.

“Our public health doctors are already looking at a lot of different metrics.”

Mr Donnelly said cases continue to rise across the country, but they are rising at a lower rate than other European countries.

Meanwhile, the World Health Organisation’s Covid-19 envoy Dr David Nabarro has said that he would not like to see more country-wide lockdowns. People should “get on” with their lives, but they should not take the virus lightly.

One in 20 people who get the virus have lingering illness and a slow recovery, he told RTÉ radio’s Morning Ireland.

Dr Nabarro also said he was concerned that some people did not believe that the disease existed, that it was a hoax. Anxiety about the virus was understandable, there was “a lot to be frightened of,” he added.

The WHO did not have an agenda, it just wanted everyone to be as healthy as possible.

Dr Nabarro explained the recent rise in cases was a result of people moving around. It was important to create as many barriers as possible for the virus. The reason why there had been fewer deaths recently was because those most at risk were being very careful as were those caring for them. “They are taking more precautions.”

However, Dr Nabarro said he was concerned that in some parts of the world the numbers being hospitalised were increasing. The levels of disease and death were increasing.