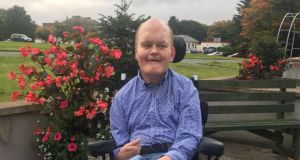 Declan Leavy (50) is a resident in a St John of God home in Ardee, Co Louth. Photo: Paula Walsh

Families of those in residential disability centres run by St John of God have expressed concerns with the Health Service Executive taking over responsibility for services, due to a funding crisis at the charity.

Declan Leavy (50) is intellectually and physically disabled and has lived in an institutional care setting for much of the last 30 years.

Two years ago he was moved from a large congregated facility in Drumcar, to a small community home in Ardee, Co Louth. The bungalow he shares with three other residents is run by St John of God.

His sister, Paula Walsh, said the move had a “huge impact” on his quality of life. “He is part of the community in Ardee, everyone knows him,” she told The Irish Times.

SJOG Community Services is funded by the HSE to provide disability and mental health services to 8,000 children and adults, and employs 2,500 staff.

On Wednesday the organisation notified the HSE it had decided to cease running the majority of its healthcare services, due to a funding crisis, and would transfer responsibility to the HSE following a 12-month notice period.

The organisation’s financial deficit had reached €37.7 million, amid underfunding from the HSE in recent years, it said.

Ms Walsh said news of the transfer of services from SJOG to the HSE had caused concern among residents’ families.

‘Any change is difficult’

“Declan needs to be fed, dressed, groomed, washed,” she said, and as such relied massively on SJOG staff. He is brought to do his shopping each week, and enjoys country music nights in Ardee, she said.

“I’d be worried, he’s flourished in the setting that he’s in, will there be an interruption to that,” she said.

“I would be worried that he wouldn’t have his own key worker or the same staff. Any change is difficult, especially for someone like Declan,” his older sister said.

Ms Walsh said she had been contacted by a number of other families concerned about whether existing standards of care would be maintained following the transfer to the HSE.

For Declan, it was crucial that he retained the same care staff, who he was comfortable with and understood his needs, she said.

Any cuts to existing services or staffing levels would be a big concern for the families of residents in disability centres, Ms Walsh said. “I just want to ensure that his wonderful life [in Ardee], that that is maintained,” she said.