Crowds turn out to bid farewell to Haunting Solider statue

The Haunting Soldier, the giant installation made of scrap metal which has galvanised many into remembrance of the first World War is now returning to its permanent home in Dorset. Video: Ronan McGreevy 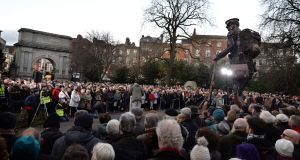 It was billed as the people’s farewell to the Haunting Soldier, the giant installation made of scrap metal which has galvanised many into remembrance of the first World War.

The people responded on Sunday afternoon filling the public space inside the Fusiliers’ Arch and surrounding the imposing figure which will be returning home to the forge which is its permanent home in Dorset on Monday.

Sabina Purcell, who brought the statue to Ireland, wore red in reference to the colour of paint that was thrown over it on Thursday morning.

Ms Purcell read out a message on behalf of the owner of the Haunting Soldier, Jo Oliver, the artist Martin Galbavy and the forge owner Chris Hannam.

Ms Oliver described the Haunting Soldier as a “ghost-like figure” who remembered those who returned from the war “frayed and in pieces to families from whom they were taken”.

Ms Purcell said the statue owners took “enormous pride” in having made the gesture of lending the sculpture to Dublin and had planted an oak tree in their farm in Somerset in honour of the people of Ireland.

Ms Purcell drew warm applause when she thanked the Office of Public Works for their “sterling efforts” in cleaning up the statue after it was vandalised.

If the attack was meant to change public opinion, it would appear to have had the opposite effect judging by the crowds that turned out for the farewell.

One by one members of the public came to publicly speak about their relatives who had fought in the war.

Emer McCarthy remembered Tim Hearns “my grandfather and my hero”, who was a regular soldier in the Irish Guards. When war broke out in 1914, he was only 17. He was shot and badly injured at Ypres.

“When we were children, we used to ask if we could put our finger through the hole in his arm little realising the horrific injuries he had,” she said.

Broadcaster Joe Duffy remembered his two granduncles, Christopher and Tom Carroll from Church Street in Dublin. Christopher was killed in the war, Tom survived. “Because of this event today, I will meet Tom Carroll’s grandchildren,” he said.

One spoke of his grandfather who was killed on the first day of the Battle of the Somme and has no known grave. “There was no headstone, this is his headstone,” he said looking up at the Haunting Soldier.

Fine Gael Senator Frank Feighan has suggested that a smaller version of the Haunting Soldier could be placed in St Stephen’s Green as a permanent war memorial.