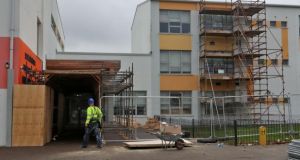 The Department of Education has indicated that it intends to take further legal action against Western Building Systems (WBS), the construction company at the centre of a controversy over structural defects in school buildings.

The department last month said that “precautionary measures” would be needed at 22 schools built by the Co Tyrone firm, and considerable sums of money have already been spent on temporary repairs.

Costs are expected to escalate in the new year when more detailed structural investigations of 42 schools get under way to determine the extent of work required to ensure all schools are safe.

In a letter to the Public Accounts Committee, the secretary general of the department, Seán Ó Foghlú, said legal actions had , through the Chief State Solicitors Office, already been initiated against WBS “with regard to four school buildings that had presented deficiencies with regard to fire safety”.

“The department would intend to take a similar approach in relation to structural defects, with a view to the State recouping remediation and other relevant costs,” he wrote.

“The full scale and cost of remediation work required will not be clear until the next phase of technical investigations across the 42 schools has been completed. While legal proceedings are ongoing, the department will be limited in the extent to which certain aspects of the engagement with Western Building Systems can be referenced in public commentary.”

Mr Ó Foghlú also said the department was committed to a review of its own design and build programme, which will be conducted by an independent person or entity.

“We are also continuing to engage intensively with the school authorities across the 42 schools constructed by Western Building Systems to ensure that they are fully informed of developments relating to their schools. Our overriding priority through this process continues to be the safety of school students and staff.”

Minister for Education Joe McHugh has said it was too early to determine the cost of repairs to schools, but said the scale of remedial work required to make 42 schools with structural concerns safe would require “big money” and a supplementary budget for his department.

Labour TD Joan Burton said she expected the full cost could range anywhere between €50 and €120 million.