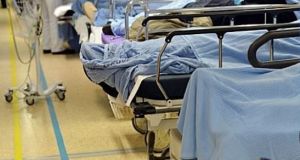 Irish people are the most positive in Europe about their health status, according to a new report, and are among the least likely to report a chronic health condition or disability

Ireland has the fourth-lowest number of hospital beds relative to its population, according to an OECD report.

With 2.3 beds per 1,000 of population, Ireland ranks just above Denmark, the UK and Sweden, but has barely one-third of the number of beds in Germany, the Health at a Glance report finds.

Critics of the Irish health system have repeatedly called for an increase in the number of hospital beds, with last year’s Sláintecare report putting the number needed at 2,600 at a minimum.

The death rate from respiratory diseases in Ireland is the second highest in Europe behind the UK, despite lower levels of air pollution. Some 236 people died from exposure to air pollution in 2016, and 11 from extreme weather conditions, the same year.

Irish people are the most positive in Europe about their health status, according to the report, and are among the least likely to report a chronic health condition or disability.

The rate at which new cancers is reported is the second highest of the 36 countries surveyed, but the share of adults with diabetes is the lowest. Survival and death rates for various types of cancers are generally close to the EU average.

Over the past decade, Ireland has lost its place as the biggest drinker in Europe and now ranks seventh for alcohol consumption.

Health spending in Ireland, at €3,930 per capita, is fifth highest, behind Luxembourg, Germany, Sweden and Austria. Spending on retail pharmaceuticals here is second highest on a per capita basis.

Ireland has the fifth-lowest number of practising doctors relative to the population, but the fifth-highest number of nurses. But when hospital nurses only are considered, Ireland ranks near the bottom for those countries whose data is recorded.