Cost of policing visit of Duke and Duchess of Cambridge put at €1.3m 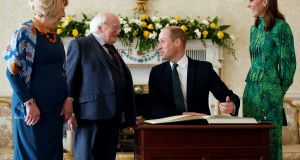 The cost to the Garda of providing security during the recent visit of the Duke and Duchess of Cambridge to Ireland has been estimated at €1.3 million.

A major security operation was required when Prince William and Kate Middleton visited the Republic last month for a trip of just over 48 hours.

It involved armed gardaí from the Emergency Response Unit escorting the couple around with Royal protection officers from Britain. Snipers were also deployed on rooftops in some areas they visited for long periods.

The high visibility policing operation, involving uniform frontline members, was also in place in the places they visited and on the routes between those locations.

Significant road diversions were also in place while drains were combed for any explosive devices in advance of their visit. Many of the gardaí involved in the security operation were working overtime in order that regular policing could continue across the country.

The cost of the security operation has been confirmed by Garda Commissioner Drew Harris in correspondence to the Policing Authority.

Garda sources while it may take some time for all of the overtime and expense claims to be processed before a precise cost could be arrived at, the final bill would be €1.3 million or very close to that figure.

Mr Harris told the Policing Authority the visit was a “significant pressure… specifically on the overtime and travel and subsistence budgets”.

The cost of the visit, from March 3rd to 5th, compares to €300,000 for a visit to Ireland of about 36 hours by the Duke and Duchess of Sussex Prince Harry and Meghan Markle in 2018.

However, the cost to the Garda of the visit was modest compared to the €24 million security budget for the visit of Queen Elizabeth to Ireland in 2011.

The visit of the Duke and Duchess of Cambridge saw the couple visit President Michael D Higgins at Áras an Uachtaráin as well as other parts of Dublin including the Garden of Remembrance, Government Buildings, the Guinness Store House, Temple Bar and Howth.

They also visited the Teagasc Animal Bioscience Research Centre in Co Meath and met farmers in the county as well as the children’s and family charity Extern in Co Kildare.

They concluded their visit in Galway, with a walkabout in the city, and were given a crash course in hurling at Salthill Knocknacarra GAA Club.

Mr Harris also told the Policing Authority the policing operation around Covid19 would put the force under unprecedented financial pressure but said senior officers had been asked to stay within their budgets for this time of year.