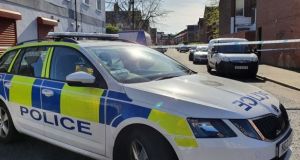 The scene at Haywood Avenue in south Belfast close to a flat where a 39-year-old woman’s body was found in the early hours of Wednesday. Photograph: Rebecca Black/PA Wire.

A man has been remanded in custody charged with the murder of his mother in south Belfast.

The body of Emma Jane McParland (39), was found with stab wounds at a flat on Haywood Avenue in the early hours of Wednesday.

Police charged her 21-year-old son, Jordan Kennedy, following a post mortem examination to establish the cause of death.

Mr Kennedy, of Haywood Avenue, appeared at Belfast Magistrates’ Court on Thursday via a video-link from a city centre police station.

He spoke briefly to confirm that he understood the single charge of murdering his mother.

No further details were disclosed, and defence solicitor Adrian Harvey did not question the detective during the hearing.

Mr Harvey also confirmed his client was not seeking bail.

In a statement released afterwards, Detective Chief Inspector McCartney said: “My thoughts go out to the victim’s family and friends at this tragic time.”

He appealed for anyone with information to contact police.