An Taoiseach Leo Varadkar has told the Dáil that the easing of Covid-19 public health measures "will be gradual" and may not mirror the manner in which they were introduced. Video: Oireachtas TV 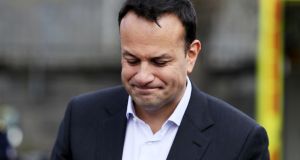 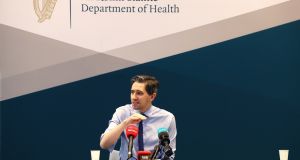 Minister for Health Simon Harris said the progress was a tribute to ‘the solidarity of the Irish people’. Photograph: Brian Lawless/PA Wire

Passengers arriving in Ireland will be checked to ensure they will self-isolate under new measures to be announced shortly.

Minister for Health Simon Harris has told the Dáil the State would have to provide accommodation for passengers if they were not in a position to self-isolate when they arrived in Ireland.

He said the Government was consulting a few other key stakeholders but the guidelines would involve passengers filling a form stating where they are staying, which would be checked. It would involve “more than just taking a person at their word that they are following the isolation restrictions”.

Speaking during the Dail debate on the coronavirus pandemic Mr Harris said however that it was not for the Chief Medical Officer to have responsibility for dealing with individual applications when asked about fruit company Keelings bringing in 189 workers from Bulgaria for fruit picking over the summer.

Mr Harris also said it was the advice of the Chief Medical Officer that hardware stores should only open for emergencies.

He called for clarity on Government policy and said they needed to do better than “leaflets at our airports” and should ensure medical risk assessment teams are established.

Earlier Mr Harris said the reproductive rate of Covid-19 has fallen further to between 0.5 and 1.

The reproductive rate, known as R0 or R naught, had fallen to between 0.7 and one last week.

It is the rate at which the virus is transmitted and the new figure showed it was being suppressed.

He also said the numbers being admitted to hospital with the virus had also fallen from 100 a day at the beginning of April to 40 now.

Speaking during the ongoing debate on the coronavirus crisis Mr Harris said “I am pleased to inform the House today that the reproductive rate has fallen even further to between 0.5 and 1. That means that for every one person who contracts Covid-19 we now expect they will spread it to no more than one other person.”

Mr Harris said the progress was a tribute to “the solidarity of the Irish people”.

But he warned that the number was not static and the progress had been achieved by “staying apart and we need to continue to keep that distance”.

But he warned that “we are by no means in a safe place”.

“If we had to decide on lifting measures today for tomorrow, the Chief Medical Officer advises me we would not make any changes.

“But we are working on a roadmap, which we will finalise over the next week. One which must acknowledge increased movement carries increased risk.”

“We know there is a thin line between where we could have been, where we are and where we may yet be.”

He said the new road map was a “new social contract between Governments and the people”.

Earlier on Thursday, Opposition party leaders criticised the Government over what they claimed was a lack of transparency and asked who was in control of decision making.

Labour leader Alan Kelly questioned the make-up of the National Public Health Emergency Team (NPHET) which he said had grown substantially since it was convened in January with 11 sub-groups and he asked if the Government had approved this.

“Ultimate decision making cannot be in the hands of a few and elected office cannot be subservient even in this crisis.”

He pointed out that his party’s call for a cross-party committee had been dismissed by the Dáil.

“I say all this today also as we look to chart a roadmap out of this crisis. Taoiseach it must be a roadmap decided ultimately by you and your Government and shaped by this chamber. The kite flying and mixed messaging from you and the Minister for Health last weekend must end. Remember everyone is hanging on your every word.”

The Tipperary TD asked “who is NPHET ultimately accountable to? Who makes the final decisions? Do NPHET have to consult with you or the Minister for Health before making formal announcements that affect all the citizens of this country? I presume they do. But how does that happen?”

Mr Kelly also questioned why notes or minutes had not been published since the end of March.

“There is a huge volume of people on this committee now and no disagreements of any decisions are documented.”

Fianna Fáil leader Micheál Martin said there had been “too often a sense of a resistance to being up-front about problems until the solution has been found. “There have been too many cases of legitimate questions asked by deputies and journalists being met by a lack of clarity or a deflection.”

He said it was important to recognise now that “we are at the stage where the only way to proceed is to have a more open and inclusive debate about what is to be done.”

“And we must move away from an approach which looks increasingly like decisions are to be taken first, and discussion will only be allowed afterwards.”

Sinn Féin leader Mary Lou McDonald said hospitals and their consultants should be dealing with the nursing homes in their locality. And she warned that the On Call for Ireland programme should be shifted to nursing homes.

She also called for spare capacity in private hospitals to be used for patients of nursing homes.

Earlier Mr Varadkar warned that the new enemy in dealing with coronavirus is “complacency”.

He also told the Dáil that testing for Covid-19 should be increased to 100,000 a week as the Government plans “to exit from different restrictions, and manage the aftermath”.

Mr Varadkar said however that “this is a big challenge that might not be possible but we will pull out all the stops”.

He said “our new enemy is complacency” and “if we relax in the next few days or weeks, we could lose control over the spread of the virus.

“So far, we’ve not been able to slow transmission of the virus in every setting, and its impact in long term care residential facilities, nursing homes and other care facilities is great.”

He stressed that “the easing of public health measures will be gradual and will be done in a stepwise manner as required continuous effort by all of us to suppress and control this virus”.

Mr Varadkar said “we must leave a period of time between taking each step, so we can monitor the impact necessary.

“Certainly stricter social distancing measures may have to be reintroduced if it looks like the virus is increasing again. We’ve seen this happen unfortunately in Japan in recent days.

“We must do everything we can to avoid a post peak wave, or a second wave,” he said.

Also on Thursday, the Minister for Finance Paschal Donohoe warned that the public finances must be returned to balance after the extraordinary expenditures incurred to deal with the Covid-19 pandemic.

He said that while economic growth later this year and next will “drive most of the improvement” in the public finances, some “difficult decisions” will be required by this government and the next one to close the gap between tax revenues and expenditure.

Mr Donohoe outlined the scale of the special expenditures undertaken in recent weeks and the effect of the pandemic shutdown on the economy and the public finances, before looking forward to the necessity of repairing the public finances once the worst of the virus has passed.

“If the right decisions are made at international levels, we can avoid the pain of the last crisis,” Mr Donohoe said.

“However this does not mean that we can do everything. Our deficit will have to be reduced, our national finances must return to a position of balance,” he said.

“The daily debates about making choices within limited resources that existed before this crisis will of course endure after the crisis has passed.

“What we value and prioritise and how we pay for it will continue to be a central debate of democratic politics,” Mr Donohoe said.

‘We need a bailout’

The Fianna Fáil finance spokesman Michael McGrath endorsed Mr Donohoe’s assertion of the necessity to repair the public finances in the medium term. However, he said, those are “decisions for another day.”

Fianna Fáil public expenditure spokesman Barry Cowen asked if the pandemic unemployment payment would be extended after May, and whether this could be legally done before a new Government is in place.

The Sinn Féin finance spokesman Pearse Doherty said that the government must not reduce or “taper” the special Covid-19 welfare payments of €350 a week, as suggested earlier this week by Mr Donohoe.

Mr Doherty said there should be “no return to austerity” but that the Government should borrow and secure funding from Europe for a major stimulus package. His colleague David Cullinane called for investment in housing, healthcare and better wages.

“We need a bailout for workers and for families,” he said.