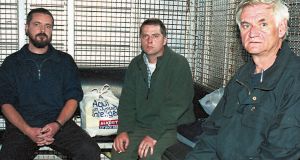 Niall Connolly, Martin McCauley and James Monaghan upon their arrival to the maximum security wing of the La Modelo prison in Bogotá, 2001. Photograph: AP Photo

Niall Connolly, James Monaghan and Martin McCauley, who became known as the Colombia Three, were arrested at Bogotá airport in 2001. They were charged with travelling on false documents and teaching members of the Revolutionary Armed Forces of Colombia (or Farc) how to build improvised mortar bombs.

After a trial and appeal, the men were sentenced to 17 years in prison in 2004, only for it to emerge that they had already fled Colombia while on bail. The sentence was ratified three years later in the country’s supreme court.

On Tuesday, in what would be the final year of their sentence, Connolly, Monaghan and McCauley were granted amnesty by a special peace tribunal in Colombia, set up following a successful peace deal between the government and Farc in 2016.

The three men were detained after returning from the Caguan region, a vast swathe of jungle and prairie granted to the Marxist rebel group during an earlier round of talks.

The men’s arrest initially threatened to derail peace processes on both sides of the Atlantic..

Ireland has no extradition treaty with Colombia, but when McCauley appealed against a firearms charge at a Belfast court in 2014, he sent a proxy, fearing extradition by the British government.

In 2016 a new peace process succeeded in ending Colombia’s five-decade war that killed more than 260,000 people and left seven million displaced. One of the provisions of the deal is a transitional justice tribunal that grants clemency for crimes committed under the banner of the conflict, in exchange for truth-telling testimony. – Guardian News and Media