Coronavirus: Man (47) whose family was told he only had 24 hours to live recovers 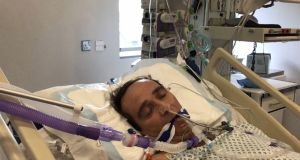 Covid-19 survivor Mark Burke has recovered and is now at home with his family in Co Wicklow. Photograph: Liveline

A 47-year-old man who contracted coronavirus and whose family was told he only had 24 hours to live has recovered from the illness and his medical records will now be used for research to help treat the virus worldwide.

Mark Burke, from Co Wicklow, was in ICU in St Vincent’s Hospital, Dublin, for four weeks. He developed a problem with his bowels, his lungs were failing, and medics believed he would not survive. His family were told to say goodbye to him.

“They told me he was completely ischemic, there was nothing that they could do for him,” his wife Joanne told Liveline on RTÉ Radio One on Thursday. “One nurse, Susie, she sat me down and said: ‘Look, the children need to say goodbye. They need to do this’.”

Mr Burke’s wife and children dressed in PPE and went to say goodbye to him while he was in ICU.

“When the kids walked in, he opened his eyes; he heard their voices. If you saw it in a movie, you wouldn’t believe it. You would think that it is so far fetched. He’s in a coma, he’s not coming out of it. He was in double organ failure, his lungs had failed him, his bowels had failed him, but when he heard his children, he opened his eyes and the nurses were witness to that.”

Mr Burke’s family returned home and awaited a call from the hospital to update them on his condition.

However, the father of four who had no underlying medical condition survived the next 24 hours, and medics began to provide him with various medications in a bid to improve his bowels to the point where they could operate on him.

“They said he had a 5 per cent chance of regenerating enough of the bowel to stabilise him enough for the operating theatre. And it did happen,” Ms Burke said.

“They kept saying why is he not going into multi-organ failure”, why is he still with us? They couldn’t understand it. They said right, we’ve secured him enough, we’ve stabilised him enough. We were absolutely thrilled. We’re just so overjoyed with the outcome.”

Mr Burke underwent surgery, made a full recovery and is now back at home with his family.

Mr Burke said he “can’t imagine” what it was like for his family.

“I don’t know how they did it. I personally think if I was in Joanne’s shoes, I would have caved,” he said. “I’m doing good. I’m in recovery mode. From my perspective, what they did for me in ICU is absolutely out of this world.”

He added that his medical records are being released to “every medical board across the world” for research purposes.