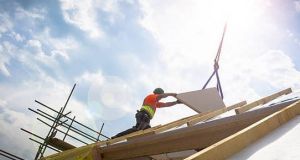 Work is to restart in Cork city at three sites, with almost 100 homes in total due to be finished shortly at White Street, Blarney Street and Knocknaheeny. Photograph: Getty Images

Work is to restart on only three Dublin city social housing sites following the easing of construction restrictions during the pandemic.

The city has the highest housing waiting list in the State.

Earlier this week the Housing Agency announced work could resume at 35 “essential” social housing projects that were nearing completion across the State.

The step was being taken to ensure there was “sufficient accommodation available to meet the needs of families and individuals who are currently in emergency accommodation and to households at risk of homelessness”.

Almost 1,000 homes are expected to be completed.

However, despite having the largest number of homeless families in the State and the longest housing waiting list at almost 18,000, only three social housing projects are resuming in Dublin, which will result in 169 homes becoming available.

Two of these sites are to the south of the city, and are being built by housing association Fold for senior citizens. The larger of the two is at Armagh Road in Crumlin, where 97 apartments are due for completion, while another scheme of 43 homes will be finished at Dolphin’s Barn, replacing old senior citizens’ bedsits.

On the north of Dublin a complex of 29 apartments for general social housing is being completed by Oaklee Housing.

Dublin City Council’s head of housing Brendan Kenny said he hoped work would resume on more sites shortly. “At the moment work is only being allowed to resume on sites that could be completed in the next six weeks. There will probably be more; it’s just being done sparingly to start with.”

Fingal County Council has the largest number of sites restarting, with six projects again under way across north and west Dublin, with two sites in Kinsealy and one each in Swords, Balbriggan, Ballymun Cross, and Hansfield in Dublin 15. However, the total number of homes is lower than in the city, with 91 due for completion in the coming weeks.

In south Dublin three sites are also seeing a resumption of work, with 106 homes due to be finished shortly in Newcastle, CityWest and Clondalkin. No projects are resuming in the Dún Laoghaire-Rathdown area.

Work is also restarting in Cork city at three sites, with almost 100 homes in total due to be finished shortly at White Street, Blarney Street and Knocknaheeny.

In Co Kilkenny work is resuming at three sites: at Bolton in Callan, at Breagagh Place in Piltown, and at Nuncio Road in Kilkenny City.

Two sites have been selected in Waterford, one in the city at Knight’s Grange, Lacken, and one in Co Waterford at Na Fearnóga, Ballinroad, Dungarvan.

Two sites have also been selected in Co Westmeath, both in Athlone at Arcadia in Clonbrusk and the Orchard in Blyry.

In Co Carlow work is restarting at Gleann na Bearu in Bagenalstown.

Construction is also resuming at sites in Cos Kildare, Louth, Meath, Tipperary and Wicklow.

Prior to recommencement of any construction local authorities are required to ensure contractors adhere to Covid-19 public health guidelines and other relevant health and safety regulations and protocols applicable to the construction sector.