Coronavirus: Northern Ireland restrictions have ‘number of weeks yet to go’ 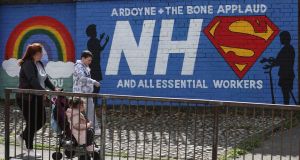 A family walk past a mural in Belfast’s Ardoyne area paying tribute to key workers who have been responding to the coronavirus pandemic. Photograph: Peter Morrison/PA Wire.

There are a “number of weeks yet to go” before Northern Ireland will be in a position to safely relax any of the restrictions aimed at limiting the spread of coronavirus, the North’s chief medical officer has warned.

Speaking at the Executive’s daily coronavirus media briefing on Tuesday, Dr Michael McBride said he did not want to “give mixed messages” and that he would be “very reluctant to put in place an artificial timetable” for making decisions on the lockdown prematurely.

“To do that we need to have that surveillance in place and we absolutely need to have the test track and trace approach in place...Those are absolute prerequisites for us stepping down or away from any of the current measures.”

The North’s Department of Health reported 17 further coronavirus-related deaths on Tuesday, bringing the total number of hospital fatalities to 404.

The figures include six deaths in last 24-hour reporting period, as well as 11 fatalities which had occurred previously but which had not yet been reported.

An additional 44 patients tested positive for coronavirus, bringing the total number of confirmed cases in the North to 3,836.

Figures released by the Northern Ireland Statistics and Research Agency (NISRA) on Friday, which records deaths in all settings, including care homes and hospices, show that the number of fatalities in Northern Ireland is at least one-third higher than the figure reported daily by the department.

A pilot contact tracing scheme began in Northern Ireland on April 27th, and is due to be expanded further from the middle of this month.

The North’s Minister for Health Robin Swann said his preference would be for a single contact tracing app to be used across the British Isles as each of the jurisdictions seek to relax restrictions imposed to prevent the spread of Covid-19.

This would mean, Mr Swann said, that “no matter where an individual is travelling once we come out of lockdown, whether east west or north south, that same platform, that same app, can be utilised”.

He said the app had been discussed at a meeting of the UK’s four health ministers on Tuesday, and conversations were taking place “across these islands” to make sure that if different apps were used, that they would be compatible.

Dr McBride said work was underway with colleagues in Ireland and the rest of the UK in regard to digital platforms to support contact tracing, and they were considering the use of digital proximity apps on mobile phones, but no decisions have yet been made.

Meanwhile, Mr Swann has spoken of his shock at pictures which emerged on Monday of an Aer Lingus flight from Belfast to London with an almost full cabin and no apparent evidence of social distancing guidelines being followed.

“It was as if they were living in a time before Covid-19, completely oblivious of the regulations and social distancing and guidance that have been enunciated and published by our Executive here and the government in Westminster,” he said.

“How they could think that the practice that they were actually carrying out was in any way in keeping with the guidance that we’ve been issuing?

“I think it’s a short, sharp shock to them that they should actually be behaving still in that manner and I would ask them publicly to actually revise that very quickly.”

Aer Lingus has said it is “reviewing its processes and procedures applicable to the operation of this service” and any necessary changes “will be implemented as a matter of urgency.”